25 April 2014
Continued international support for the efforts of the Government of Myanmar in the areas of democratization, socio-economic development and national reconciliation will be vital, Secretary-General Ban Ki-moon said, noting that despite positive changes, the country faces a number of serious challenges.

“Myanmar is in the midst of a defining phase in its history,” Mr. Ban said at the first meeting of the Partnership Group on Myanmar, which he convened in New York on Friday.

The Partnership Group is a reconfiguration of the Group of Friends of Myanmar, which decided last September that it should take a different form to better reflect the positive developments on the ground and further broaden the scope of the partnership between Myanmar and the United Nations.

“The country’s historic transformation is beginning to be expressed in numerous positive changes,” Mr. Ban said, noting, among others, the opening up of the economy to the outside world and measures for the release of political prisoners and greater civil society activity.

“These efforts have been welcomed widely within the country and beyond,” he added.

“However, Myanmar continues to face significant challenges, including those related to the first census operation in more than 30 years, preparations for elections in 2015, constitutional reform, negotiations towards a nationwide ceasefire and the start of a political dialogue as well as the serious inter-religious and communal tensions in Rakhine state and in other parts of the country.”

Participants at the meeting, which was attended by a ministerial delegation from Myanmar, voiced their continued support to the Government’s reform efforts, according to information provided by the Secretary-General’s spokesperson.

While welcoming the negotiations between the Government and the armed ethnic groups, Member States called for continued commitment and political will to be displayed on all sides to enable the signing of a nationwide ceasefire and the commencement of a political dialogue.

Referring to recent developments in Rakhine, Member States stressed the need for firm action by the Government to curb any incitement to violence, including through hate speech. They underlined that overcoming communal tensions and addressing the underlying issues of citizenship were urgent priorities to ensure equity and inclusiveness in the reform process.

Among other issues, participants discussed the challenges and implications of the recent conduct of the population and household census across the country. 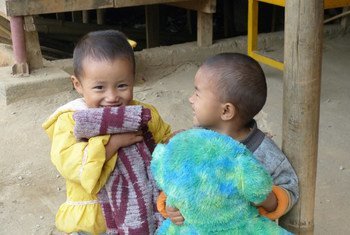 22 April 2014
Recent fighting between Government forces and Kachin rebels in Myanmar, and the resulting displacement of thousands of people, has significantly increased the risks to young people, including possible recruitment, limited access to basic services and the threat of landmines, the United Nations Children’s Fund (UNICEF) warned today.