“Sport has great power in bringing people together,” Mr. Ban said following the signing of the Memorandum of Understanding at United Nations Headquarters in New York, where he thanked the International Olympic Committee (IOC) and the wider Olympic movement for being “such a steadfast partner of the United Nations.”

To further this effort, Mr. Ban today announced the appointment of Jacques Rogge of Belgium, the former IOC President and currently its honorary president, as his Special Envoy for Youth Refugees and Sport.

A former Olympian, Mr. Rogge, will help promote sport as an empowerment tool for youth from displaced and refugee communities towards peace, reconciliation, security, health, education, gender equality, and a more inclusive society, according to Mr. Ban’s spokesperson.

In conflict areas such as Syria, the Central African Republic and South Sudan, and in the neighbouring countries which host millions of refugees, “sport has a role to play in helping to restore at least some sense of normalcy,” Mr. Ban said.

Remarks to the press by Secretary-General Ban Ki-moon and IOC President Dr. Thomas Back. Credit: UNTV

Sport can also motivate children to enrol and do well in school, empower girls and women by providing opportunities for leadership and accomplishments, and help reach many groups and communities with important messages on HIV/AIDS and other diseases, drug abuse and environmental protection.

It can “be used to bridge cultural, religious, ethnic and social divides,” Mr. Ban stressed.

He then quoted basketball legend Magic Johnson, who spoke in response to the growing controversy over racially insensitive comments involving the Los Angeles Clippers, “We all play with different races of people when you’re in sports. That’s what makes sports so beautiful.”

In his remarks, Mr. Bach said the IOC was “extremely honoured and proud and excited to join hands with the UN” and he hoped that this move will bring their cooperation “to an even higher level” and “even closer and better for humankind.”

Today’s event is a continuation of the inaugural International Day of Sport for Development and Peace, which was first celebrated on 6 April this year.

At both events, Mr. Ban urged Member States to look at all possibilities to use sport as a tool for development and peace.

The President of the General Assembly, John Ashe, also praised the power of sport, particularly now as the international community is outlining the priority agenda following 2015, the deadline for the eight anti-poverty targets known as Millennium Development Goals (MDGs).

“We hope to be able to count on the voices of athletes worldwide to put the spotlight on our new development goals, as well as to set an example by embracing sustainable practices,” Mr. Ashe said.

He said the virtues of sport are “an ideal match for what we hope to achieve here at the United Nations.”

“At its best, sport fosters unity, encourages participation and inclusion, advances human rights, and promotes peace and development,” he added.

A few days ago, the UN wrapped up its own athletic competition. The week-long 41st UN Inter-Agency Games ended on Friday in Hempstead, New York. Staff from across the world participated in the annual event, competing as part of their workplace and not countries of origin. This was the first time since the games were started in the early 1970s that the competition was held in the United States.

UNESCO teams with media to upload peacemaking power of sport 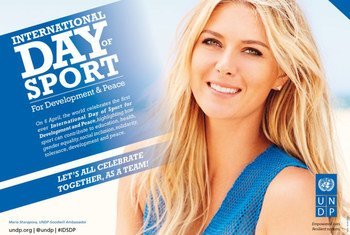 6 April 2014
The United Nations is calling on global citizens to become part of its team to harness the power of sport to build a better world for all as it marks the first ever International Day of Sport for Development and Peace.