28 April 2014
The United Nations human rights chief today called on the parties to the conflict in South Sudan to respect the cessation of hostilities in order to stem the suffering of ordinary civilians and to ensure that it is safe enough for those uprooted by months of violence to return to their homes.

“I hope that the cessation of hostilities agreement will be respected by both parties – that is the immediate concern. People do not feel safe,” said High Commissioner for Human Rights Navi Pillay.

The High Commissioner for Human Rights arrived today in South Sudan along with the UN Special Advisor on the Prevention of Genocide, Adama Dieng, to discuss the worsening human rights situation in the wake of the recent mass killings in the capitals of Unity and Jonglei states.

“We from the outside think the situation is very grave and there might be revenge killings. You know when there is a dispute between two leaders, as we say in Africa when two elephants fight it's the grass that suffers,” said Ms. Pillay.

The civilians in South Sudan, she added, are suffering “huge human rights violations,” including violence and sexual violence, as well as violations related to the right to food.

The visit comes at the request of Secretary-General Ban Ki-moon, who has expressed concern over the situation in South Sudan, where a conflict that began in mid-December 2013 as a political dispute between President Salva Kiir and his former deputy president, Riek Machar, is believed to have left thousands dead and forced tens of thousands to seek refuge at UN bases.

On the ground, the UN Mission in South Sudan (UNMISS) reports fighting between the Government armed forces, the Sudan People’s Liberation Army (SPLA), and opposition forces in Mayom in Unity state, with the town reportedly changing hands twice over the weekend. There was also fighting near Manga, north of the state capital, Bentiu.

In Bentiu itself, peacekeepers extracted 16 civilians, including one female and one child, from various locations around town and brought them to the protection of civilians’ site in the UN compound. The mission also accepted 200 patients from Bentiu hospital who arrived at its gate yesterday. Currently, some 22,500 civilians are seeking shelter at the Mission site in Bentiu.

Also over the weekend, the Mission said that there were clashes in Mapel in Western Bahr el Ghazal State. Fighting between youth and some soldiers, involving heavy weapons and mortars, was reported in the centre of the State capital of Wau. On Sunday, the Mission received more than 650 internally displaced persons (IDPs) at its protection site in Wau, with reports of more civilians on their way seeking shelter.

“I’ve come here to speak with the Foreign Minister, to ask that he do his best to stop this, to make the place safe so that the IDPs can return to their homes, particularly in time for the planting season,” she said.

Security conditions permitting, Ms. Pillay will also travel to sites where recent grave human rights violations have occurred to assess the situation and talk to victims. She is also expected to meet other key actors, such as the National Human Rights Commission.

The High Commissioner will also attempt to meet or talk with opposition leaders either in South Sudan itself or in the Ethiopian capital, Addis Ababa, where she also plans to meet senior officials involved in the South Sudan peace process. 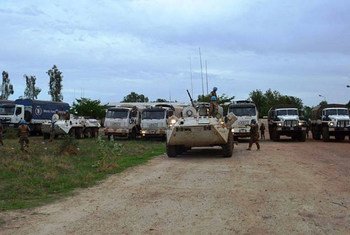 21 April 2014
Opposition forces in South Sudan killed “hundreds of South Sudanese and foreign civilians” after determining their ethnicity or nationality when they captured Bentiu last week, the United Nations confirmed today, calling for an immediate stop to the targeting of “innocent, unarmed” civilians.