28 April 2014
Honduras must immediately adopt measures to effectively protect children, without discrimination, from all forms of violence, abuse and exploitation, an independent United Nations human rights expert has urged.

Najat Maalla M’jid, the UN Special Rapporteur on the sale of children, child prostitution and child pornography, said that since her first official visit to the country two years ago, the number of complaints related to sexual exploitation and abuse, early pregnancy, sale, trafficking and child labour have increased.

“Many children are at risk of falling victim [to] exploitation and abuse because the same risk factors that I signalled two years ago persist,” she stated following her five-day visit to Tegucigalpa, where she met with government and civil society representatives, and visited two centres for children run by the Honduran Institute for Children and the Family (IHNFA) and the Casa Alianza charity.

The risk factors include poverty, unemployment, insecurity, violence and proliferation of firearms, and migration.

The Government has taken steps to implement policies that strengthen protection of children in this context. Among them, adopting reformed legislation on family and children, and expansion of the Office of the Special Prosecutor for Children.

However, steps to ratify the Hague Convention on Intercountry Adoption are still pending, Ms. M’jid said, summarizing her report which will be presented to the UN Human Rights Council next March. Children who are adopted without strict legal procedures are at a higher risk of being trafficked or could potentially be involved in corruption, abuses and exploitation.

The Special Rapporteur also urged the re-establishment of a special police unit on trafficking and a national complaints hotline known as “Breaking the Silence,” both of which have been dismantled in the past two years.

Among her other recommendations, the expert official called for greater coordination and follow-up in care services provided to children by the State.

She praised the adoption of the National Policy and Action Plan on Human Rights, which incorporates all international recommendations concerning protection of children’s rights, but urged that the Government bring the plan in line with its child protection strategy and allocate adequate resources.

The Special Rapporteur also expressed concern about the Government’s initiative “Guardians of the homeland,” which tasks armed forces with training vulnerable children in values.

“The best way to combat violence and insecurity is by offering vulnerable children and families sustainable alternatives,” the expert stressed. 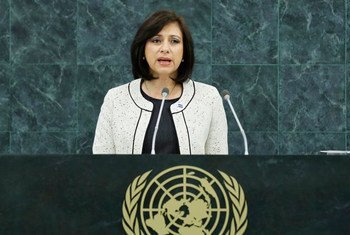 27 September 2013
Highlighting Honduras’ success at overcoming its “severe” 2009 political crisis, the country’s Vice-President told the United Nations General Assembly today that the Government will “stay the course with a firm hand,” by taking action to strengthen its institutions and curb the negative impacts of transborder crimes such as drug trafficking.