The United Nations agency assisting Palestinian refugees across the Middle East today strongly condemned the recent killing of three Palestinian refugee children in different parts of Syria, and reiterated the UN's calls on all fighters to comply with international law and protect civilians

“These killings tragically illustrate the callous disregard of the laws of war which is resulting in the deaths of so many Syrian and Palestinian children,” the UN Relief and Works Agency for Palestine Refugees (UNRWA) said in a statement.

Eleven year old Qusay Shuraieh died on 22 April of injuries sustained in an explosion near Bilal Al-Habas mosque in Homs on 18 April. Her 12 year old brother was seriously injured, along with seven other Palestine refugee children under the age of 14.

Also in Homs, Nureiddin Majed Al Khalily, 7 years old, was shot in the back of the head last month by what appeared to be a stray bullet as he walked home from an UNRWA school in Homs Palestine refugee camp, accompanied by his nine-year old brother.

In Dara'a city, on 22 April, Malek Hasan Turani, an 11 year old boy was caught in an explosion as he walked home from school with friends and family.

“Their deaths resulted from the indiscriminate use of extremely lethal weapons and explosive devices in civilian areas, in violation of international humanitarian law and the obligation to protect civilians,” UNRWA said, extending condolences to the families.

On 23 April, the top United Nations humanitarian officials issued a strong challenge to those with the responsibility, power and influence to find the courage to re-energize a thus-far failed diplomatic push to end the brutal three-year conflict.

They called urgently on Syrian authorities and the opposition to allow aid access, end siege warfare and halt the indiscriminate bombing of civilians.

Also today, UNRWA announced that the UN agency and partners distributed food parcels to 464 civilian families in the Palestinian refugee camp of Yarmouk in Damascus.

This was the third day of distribution following 15 days of suspended access, according to UNRWA spokesperson, Chris Gunness.

“Despite the presence of large crowds of desperate civilians at the entrance to the distribution area, the operation proceeded in an orderly manner,” Mr. Gunness said.

“This is not enough,” he noted, adding that UNRWA remains “deeply concerned” about the humanitarian situation in Yarmouk where more than 18,000 civilians are believed to be trapped.

“UNRWA demands that all parties cease hostilities and seek to resolve their differences exclusively by peaceful means,” he reiterated.

Overall, more than 9.3 million people are affected by the crisis, now in its fourth year, with more than 2.4 million Syrian refugees registered in the region, according to the latest UN figures. 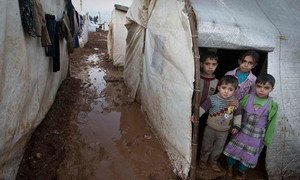 Calling urgently on Syrian authorities and the opposition to allow aid access, end siege warfare and halt the indiscriminate bombing of civilians, the top United Nations humanitarian officials today also issued a strong challenge to “those with the responsibility, power and influence” to find the courage to re-energize a thus-far failed diplomatic push to end the brutal three-year conflict.