Film tastes are as varied as the people around the world watching them, and as cinematic excellence sprouts up in dozens of countries, the United Nations and the global intellectual property (IP) system are helping to keep the reels rolling by supporting filmmaking through this year's theme for World Intellectual Property Day –“Movies – A Global Passion.”

“We have witnessed the growth not only of global audiences, but also of global production,” pointed out Mr. Gurry, noting that while Hollywood was once the dominant player, film industries around the world now flourish.

“Be it Bollywood in India, Nollywood in Nigeria, or in Scandinavia, North Africa, China or other parts of Asia – movies really are a global passion,” Mr. Gurry evinced.

To mark the Day, WIPO is helping to facilitate events in dozens of countries. Via the IP Day Facebook page, movie lovers around the world can learn about the history of film, the latest trends and how intellectual property helps to promote creativity and innovation.

“On World IP Day this year, I invite movie lovers everywhere, when next you watch a movie, to think for a moment about all the creators and innovators who have had a part in making that movie,” said Mr. Gurry in his message.

The WIPO Director also urged everyone to think about the digital challenge that the Internet presents for film.

“I believe it is the responsibility not just of policy-makers but of each of us to consider this challenge, and to ask ourselves: How can we take advantage of this extraordinary opportunity to democratize culture and to make creative works available at the click of a mouse, while, at the same time, ensuring that the creators can keep on creating, earning their living, and making the films that so enrich our lives?” Mr. Gurry asserted.

In Geneva, WIPO is screening the Swiss premiere of the Nigerian/British co-production of author Chimamanda Ngozi Adichie's “Half of a Yellow Sun,” a story of Nigeria's civil war with an international cast featuring Chiwetel Ejiofor, Thandie Newton and others.

World IP Day, 26 April, was initiated in 2000 to raise public awareness on the role of IP in daily life and to celebrate the contributions of innovators and creators in the development of societies worldwide. WIPO is a specialized agency of the United Nations and the leading global forum to promote intellectual property as a force for positive change.

♦ Receive daily updates directly in your inbox - Subscribe here to a topic.
♦ Download the UN News app for your iOS or Android devices.
wipo 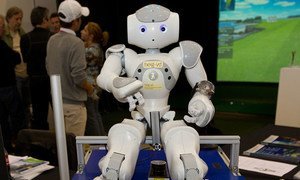