UN Photo/Isaac Billy
Residents at the camp for internally displaced persons (IDPs) at the UN Mission for South Sudan (UNMISS) Malakal Base in the Upper Nile State wait in line at the base's health facility.

24 April 2014
The United Nations Mission in South Sudan has strongly condemned today’s attack on a convoy of barges delivering urgently needed food and fuel supplies to its base in Malakal in Upper Nile state.

The four barges were traveling on the Nile River near the town of Tonga when they came under small arms fire this morning, according to a news release issued by the Mission (UNMISS). Rocket-propelled grenades were later fired at the convoy.

Four crew members and UNMISS peacekeepers were wounded during the incident. The Mission has not yet established the identity of the assailants.

The convoy was carrying food rations for UN personnel and internally displaced persons (IDPs) currently living in the UNMISS compound to the north of Malakal, as well as diesel and jet fuel. The Mission said all clearances were obtained from the relevant authorities prior to the convoy’s departure six days ago.

“The Mission is satisfied that it did everything possible to safeguard both the cargo of this four-barge convoy and also notify all the appropriate authorities,” spokesperson Joseph Contreras told UN Radio.

He added that both Government forces – the Sudan People’s Liberation Army (SPLA) – and the opposition SPLA forces have denied any responsibility for this attack, and they both indicated that none of their forces were present in the vicinity of Tonga, where the attack took place.

UNMISS once again called on the main parties to the conflict in South Sudan to comply with the cessation of hostilities agreement they signed in the Ethiopian capital of Addis Ababa in January and also respect the inviolability of UN assets and facilities in the country.

The past 10 days have witnessed an escalation in attacks, with anti-Government forces killing hundreds of South Sudanese and foreign civilians after determining their ethnicity or nationality when they captured Bentiu, the capital of Unity state last week. Violence also broke out in Bor, the war-torn capital of Jonglei state, when a mob of armed civilians forced their way into an UNMISS facility and opened fire on displaced persons sheltering inside.

With peace talks in Addis Ababa set to resume later this month, UN Secretary-General Ban Ki-moon today made phone calls to heads of State or government of the Intergovernmental Authority on Development (IGAD) to express his support for their efforts in bringing President Salva Kiir of South Sudan and opposition leader Riek Machar to the negotiating table.

“The Secretary-General feels that the two parties need to be strongly warned of the consequences of their actions before the country descends into yet further violence,” said his spokesperson. 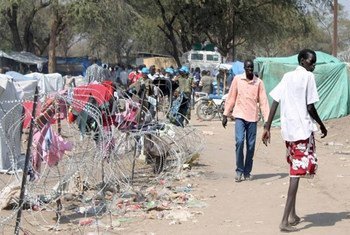 23 April 2014
Warning today that the surging violence in South Sudan is clear evidence that the United Nations can no longer operate in “business-as-usual” mode in the county, the Organization's peacekeeping chief declared that the fighting must stop immediately; the Government has a duty to protect civilians; and the warring parties should negotiate a genuine ceasefire that will be respected by all sides.