23 April 2014
Calling for continued cooperation with regional organizations to support Mali’s steady efforts towards peace and stability through inclusive talks, a senior United Nations official today told the Security Council that despite progress, the security situation in the country’s restive north remains “very fragile” with increased activity by terrorist groups.

“The window of opportunity to consolidate and sustain peace and stability in Mali stands wide open, but may also close unless sustained commitment by all stakeholders is upheld, with the support of the international community,” Special Representative of the Secretary-General Bert Koenders told the 15-member Council.

The head of the UN Multidimensional Integrated Stabilization Mission in Mali (MINUSMA) noted the importance of creating synergies between the UN, the African Union (AU), the European Union (EU), the Economic Community of West African States (ECOWAS), and other key partners.

Mr. Koenders’ briefing follows Mali’s establishment of a new National Assembly, as well as the gradual return of public administration to the northern part of the country, where recent shellings in Gao, Timbuktu and Kidal have nevertheless raised security concerns.

Rooting out extremism, he said, relies on winning the hearts and minds of the local population through internationally supported national efforts “to ensure the establishment of an effective and efficient administration to implement critical rule of law, human rights and recovery programs that foster reconciliation and community cohesion.”

Referring to UN Secretary-General Ban Ki-moon’s latest report on the situation in the West African nation, Mr. Koenders noted the importance of active participation in the peace efforts by all sectors of Malian society, among them women, young people and civil society.

“The peace train has finally left and the station and it cannot turn back,” the senior UN official said.

Addressing journalists after the briefing, Mr. Koenders said the Security Council had noted the political progress made in the past months, including informal UN-facilitated discussions between the Government and armed groups, which are contributing to preparing the ground for an inclusive political dialogue.

He noted that during today’s briefing, the Council, as Mr. Ban had done in the report, underlined that the inclusive political process should start as soon as possible based on a consensual roadmap and timeline.

“With this roadmap, all parties must sit together now without preconditions,” he said. “It is also important that the armed groups rise to the occasion and participate.”

Speaking after a full morning of meetings and closed-door consultations, Ambassador U. Joy Ogwu of Nigeria, Council President for the month of April, echoed Mr. Koenders, calling on the Malian Government and the armed groups in northern Mali to urgently agree on the roadmap.

Reading a presidential statement, Ms. Ogwu said the negotiation process must be “inclusive, credible” and “open to all communities of the north of Mali” with the goal of securing a political solution to the crisis and long-term peace and stability, while respecting the sovereignty of the Malian state.

She and the other members of the Council welcomed the Government’s recent appointment of a high-level representative to participate in the negotiations.

The Council also noted that authorities have officially started the process of cantonment, ultimately leading to a veritable disarmament, demobilization and reintegration process.

“Malians have a historic chance to overcome the crisis and to achieve a lasting, social and political contract with the north,” Mr. Koenders said referencing Mr. Ban. “They must grasp this opportunity with both hands and the UN will accompany them all the way.”

Returning to the security situation in the country, Mr. Koenders strongly condemned the reported killing of French hostage, Gilberto Rodrigues Leal, who had been kidnapped by armed men in November 2012.

The senior UN official also reiterated his call against the use of improvised explosive devices (IED) after initial reports today that a vehicle operated by MINUSMA personnel hit an IED, leaving the staff injured in a level 2 hospital in the country.

To combat the insecurity, the UN Mission has taken a series of measures, including strengthening its military patrols to 800 a month, Mr. Koenders said, as well as deployment of five new helicopters which will serve as “the ears and the eyes” of the Mission.

In the northern regions where inter-community clashes have been recorded involving Tuareg and Peuhl communities, UN human rights teams are also being deployed to establish the facts and dissuade further violence.

On a wider scale, the challenges in Mali are parts of the problems faced by the Sahel region and require regional support. IN that regard, Mr. Koenders noted the importance of the UN Integrated Strategy put forward by Romano Prodi, the Secretary-General’s Special Envoy for the Sahel.

It aims to bolster governance, security, humanitarian requirements and development, while enhancing coordination in four spheres between the Governments of the region, between members of the international community, reaching out and listening to the people of the Sahel, and within the UN system.

These topics are likely to be included on the agenda for next week’s international conference on Mali, due to be held in Bamako. The conference is a follow-up to last year’s Brussels meeting where the UN had stressed the importance of a dual trek political and military solution to stabilize the country. 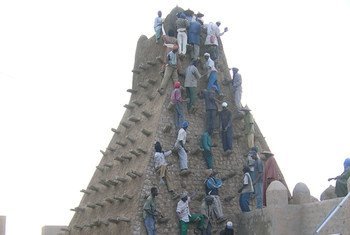 14 March 2014
Local masons in Timbuktu today started to lay down the first earthen bricks to reconstruct World Heritage mausoleums damaged when radical Islamists occupied the northern part of the country in 2012.