FAO/Roberto Faidutti
Livestock can play an important role in both adapting to climate change and mitigating its effects on human welfare.

23 April 2014
Countries need to shift to more sustainable food systems to adapt to the effects of climate change, the Director-General of the United Nations Food and Drug Organization (FAO) José Graziano da Silva told a conference in Morocco today, warning that the phenomenon has the potential to reshape the planet’s food production scenario.

"Everything we do needs to take climate change into consideration," Mr. da Silva stressed "and the time is now. We cannot afford to wait."

In an address to the seventh Forum on Agriculture in Menkes, Morocco, the Director-General asserted that climate change has reintroduced “an element of uncertainty” – after decades in which hunger was mostly caused by the inability to produce or purchase food, rather than insufficient supplies globally.

The world's poorest are particularly vulnerable. Mr. da Silva explained, that: "Not only do they have fewer means to react, but they also tend to live in already marginal production areas," where the impact of climate change in agricultural production is felt to an even greater extent.

FAO’s Director-General pointed to recent findings of the Intergovernmental Panel on Climate Change that reflected these concerns and called for urgent action.

Noting that the United Nations had declared 2014 the International Year of Family Farming, Mr. da Silva also underscored family farming as a tool for rural development and stability.

"By providing adequate support to family farming we can combat food insecurity by reaching out to a group that is in itself vulnerable – and by increasing food supply where we need it the most," he said.

He noted that some 500 million family farms account for about 80 per cent of the world's holdings, yet also include many of the most vulnerable families globally.

“Climate change is a challenge faced by both large, modernized family farms as well as small-scale family farmers,” he emphasized.

Family farmers make up an estimated 70 per cent of all food insecure households in rural areas of developing countries. Linking productive support to social protection would help to jumpstart local and inclusive sustainable development.

The Director-General, the Moroccan Ministers of Agriculture and Marine Fisheries and of the Economy and Finance signed an agreement to support food security projects elsewhere in Africa through the FAO South-South Cooperation programme as an innovative initiative to combine Government and private sector funds. 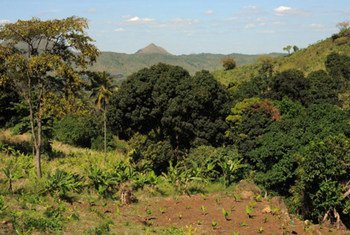 11 April 2014
From farming to forestry and fisheries, agriculture greenhouse emissions have nearly doubled over the past 50 years and may increase by another 30 per cent by 2050, according to new estimates out today from the UN Food and Agricultural Organization (FAO).