UNICEF/Giovanni Diffidenti
Syrian children stand in the entryway of their tent shelter in the Bab Al Salame camp for internally displaced persons in Aleppo Governate.
23 April 2014

Calling urgently on Syrian authorities and the opposition to allow aid access, end siege warfare and halt the indiscriminate bombing of civilians, the top United Nations humanitarian officials today also issued a strong challenge to “those with the responsibility, power and influence” to find the courage to re-energize a thus-far failed diplomatic push to end the brutal three-year conflict.

“If the civilians of Syria have not given up, how can the world give up on its efforts to save them – and save Syria?” said a joint statement by UN Emergency Relief Coordinator Valerie Amos; Anthony Lake, Executive Director of the UN Children’s Fund (UNICEF); Antonio Guterres at the UN Refugee Agency (UNHCR); Margaret Chan of the UN World Health Organization (WHO) and Ertharin Cousin of the UN World Food Programme (WFP).

The five UN officials noted that an urgent appeal issued a year ago on behalf of millions of people “has gone largely unanswered.”

“The war escalates in many areas. The humanitarian situation deteriorates day after day,” they said, adding that for the civilians remaining in cities experiencing heavy fighting, such as Aleppo and the Old City of Homs, “the worst days seem yet to come.”

More than 9.3 million people are affected by the crisis, now in its fourth year, with more than 2.4 million Syrian refugees registered in the region, according to the latest UN figures.

“All too often, humanitarian access to those in need is being denied by all sides. Aerial bombardment, rockets, mortars and other indiscriminate attacks slaughter innocent men, women, and children,” the UN senior officials said in reference to some 3.5 million people living in areas under siege or unable to be reached with humanitarian assistance.

Armed groups and forces are blocking key roads, including the road from Damascus to Aleppo, where at least one million of the estimated 2.5 million population in need of urgent humanitarian assistance. The city is now surrounded on all sides, according to the UN, impacting all facets of daily life – with scarce medical supplies administered by only 40 doctors where there once had been more than 2,000.

One-third of the country’s water treatment plants no longer function and 60 per cent of its health centres destroyed.

Aid agencies, working closely with international and national non-governmental organizations, are doing all they can despite danger to staff on the ground, the UN chiefs stressed, but it is not sufficient.

“If we are to do more, to reach and help more people, those engaged in this horrific conflict, and those with influence over them, must do more,” they urged.

The senior UN officials called on all parties to “enable unconditional humanitarian access to all people in need, using all available routes either across lines inside Syria or across its borders.”

Those sealing off cities are urged to lift the sieges imposed on civilians, including in Aleppo, the Old City of Homs and Yarmouk as well as Eastern Ghouta, Moadamiyet al-Sham, Nubl and Zahra.

The UN chiefs also called for an end to the “indiscriminate bombing and shelling of civilians by the Government and opposition groups” and a stop to all other violations of international humanitarian law. 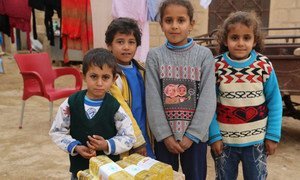