On International Mother Earth Day, the United Nations is urging greater efforts to promote sustainable development and use of renewable energy sources, with Secretary-General Ban Ki-moon appealing for worldwide changes in attitude and practice to curb the negative impact of human activity on the planet.

On International Mother Earth Day, the United Nations is urging greater efforts to promote sustainable development and use of renewable energy sources, with Secretary-General Ban Ki-moon appealing for worldwide changes in attitude and practice to curb the negative impact of human activity on the planet.

“From tropical deforestation to depleted ocean fisheries, from growing freshwater shortages to the rapid decline of biodiversity and increasingly polluted skies and seas in many parts of the world, we see the heavy hand of humankind,” said the UN chief.

As a part of the Organization’s efforts to drive home the importance of respecting and protecting the planet towards ensuring ‘the future we want’, the General Assembly is convening an interactive dialogue on “Harmony with Nature” to commemorate the International Day, marked annually on 22 April.

Following a high-level segment this morning, Member States, UN agencies and independent stakeholders will discuss in a series of roundtables ways to promote a balanced integration of the economic, social and environmental dimensions of sustainable development.

In his message on the Day, which gives an opportunity to reflect on humankind’s relationship with the planet, Mr. Ban said: “The air we breathe, the water we drink and the soil that grows our food are part of a delicate global ecosystem that is increasingly under pressure from human activities.”

As such, and with a growing population, everyone must recognize that consumption of the planet’s resources is unsustainable. “We need a global transformation of attitude and practice. It is especially urgent to address how we generate the energy that drives our progress,” said the Secretary-General, emphasizing that burning fossil fuels is the principal cause of climate change, which increasingly threatens prosperity and stability in all regions.

“That is why world leaders have pledged to reach a global legal climate agreement in 2015.

He said that action on climate change presents multiple opportunities to “reset our relationship” with Mother Earth and improve human well-being, especially for the poorest and most vulnerable. Sustainable energy for all can increase health, wealth and opportunity for billions of people, as can climate-smart agriculture, more efficient cities, and better managed and protected forests.

To generate ambitious action on the ground and raise momentum for a new climate treaty in 2015, Mr. Ban is convening a climate summit in New York on 23 September this year. He is inviting Heads of State and Government along with private sector and civil society leaders to showcase initiatives and forge alliances that can help launch a sustainable future.

“But, they need support and encouragement, for change is never easy. So today, on International Mother Earth Day, I appeal to all people everywhere to raise their voices. Speak out on behalf of this planet, our only home,” said the Secretary-General.

General Assembly President John Ashe meanwhile called on the UN family to promote sustainable development and the use of renewable energy sources throughout cities and communities.

“As we look to promote the post-2015 development agenda, I call on Member States, civil society and other stakeholders to answer the call put forth in the 2009 UN resolution by the General Assembly to invest more in sustainable technology and to promote our ecosystems through global environmental public policies,” he said.

As the world confronted today’s unique sustainable development challenges, stakeholders’ understanding of the economic, social and environmental needs of present and future generations must be rooted in the most up-to-date scientific information.

“Our global strategy must promote sound environmental ethics, and continually emphasize humanity’s interconnectedness with nature,” said Mr. Ashe, looking forward to the Assembly’s discussions on the issue throughout the day.

In his remarks to the Assembly dialogue, Mr. Ashe said the history of civilization is the story of the sometimes complex relationship of human beings with nature and the planet. “From the time man sought dominance and control over the environment, the quality of our lives as human beings has changed radically.

While that change was largely positive, modern patterns of consumption and production have caused such overexploitation of natural resources that there is disequilibrium in the delicate balances of earth’s ecosystems,” he said.

The evidence is that the current global population is using vast quantities of natural resources at so rapid a rate that we are consuming 50 per cent more resources than the planet can provide.

“Consequently, today’s lifestyles have ushered in what scientists are now calling the Anthropocene Era,” said Mr. Ashe, explain that this essentially this means man’s lifestyles, actions, technologies and practices can and are irrevocably and adversely impacting nature, putting the survival of many species under threat.

“We cannot and must not ignore the cries of our planet to restore a more harmonious relationship with nature. Nor must we lose the opportunity to work harmoniously with each other for the common good,” he said, encouraging delegations to consider the relevant information on the UN Harmony with Nature website as they consider ways to further build a knowledge network on sustainable development, the efforts of which will serve to produce a balanced paradigm for the planet and for people. 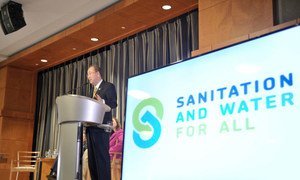 Secretary-General Ban Ki-moon attended today the Climate Leaders’ Summit in Washington, D.C., recalling the importance of keeping global warming as a top concern in the development agenda, and urging Governments to reach a universal legal climate deal by the end of the year.