The United Nations has renewed its demand for unimpeded humanitarian access to the besieged Palestinian refugee camp of Yarmouk, warning that there is no UN food aid left there as of Saturday given that the recent escalation fighting between the parties to the Syrian conflict has prevented the delivery of desperately needed assistance.

Spokesman Chris Gunness said the UN Relief and Works Agency for Palestine Refugees in the Near East (UNRWA) was not authorised to distribute food aid on 18 April in Yarmouk, where more than 20,000 civilians are dependent on UN assistance.

“This is the tenth consecutive day that UNRWA has been unable to distribute food assistance inside Yarmouk. Given that an UNRWA food parcel lasts for a maximum of 10 days, from tomorrow there will be no UN food in the camp,” he said yesterday.

“UNRWA remains deeply concerned about the desperate humanitarian situation in Yarmouk,” said Mr. Gunness, noting that the repeated resort to armed force has, over the previous month, repeatedly disrupted efforts to alleviate the plight of trapped civilians.

As a result, UNRWA was able to access Yarmouk on only 10 days over the 30-day period between 11 March and 10 April, distributing only 3,390 food parcels.

♦ Receive daily updates directly in your inbox - Subscribe here to a topic.
♦ Download the UN News app for your iOS or Android devices.
yarmouk 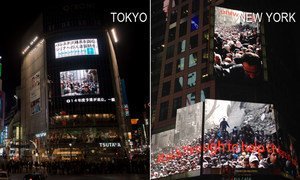 The United Nations has drawn on the bustling energy of two of the world’s most fabled crossroads – New York City’s Times Square and Tokyo’s Shibuya crossing – to spotlight the ongoing struggle of besieged civilians trapped amid Syria’s civil war, launching a “flashmob” and simultaneously showing on the junctions’ mega-billboards the now-iconic photograph of thousands of people in a Damascus refugee camp waiting in line for food supplies.