17 April 2014
Amid escalating violence in northern and central South Sudan, United Nations Secretary-General Ban Ki-moon strongly condemned today’s attack on civilians and peacekeepers at the UN mission base in Bor, the war-torn capital of Jonglei state, by a mob of armed civilians who forced their way into the facility and opened fire on displaced persons sheltering inside.

“This attack on a location where civilians are being protected by the United Nations is a serious escalation,” said Mr. Ban in a statement issued by his Spokesperson in New York, which reminded all parties that any attack on UN peacekeepers is “unacceptable and constitutes a war crime.”

“The Secretary- General expresses his condolences to the bereaved families and pledges all possible support to those wounded in this attack,” the statement continued.

The UN Mission (UNMISS) has reported that some 5,000 internally displaced persons (IDPs) were sheltering at its base in Bor at the time of the attack. Dozens were wounded and are receiving medical attention at the compound’s clinic. In addition, UNMISS says that two of its peacekeepers sustained injuries repelling the armed mob.

Mr. Ban called on the Government to take immediate steps to ensure the safety of all the Mission’s civilian protection sites throughout the country. In his statement, the UN chief also urged all parties to refrain from any actions or statements that could further escalate the situation.

The violence that has swept South Sudan since mid-December 2013 has left thousands dead and forced around a million people to flee their homes after fighting broke out in the capital, Juba, between soldiers loyal to President Salva Kiir and forces who sided with former vice-president Riek Machar.

UNMISS has opened the gates at 8 of its bases in the country to those seeking refuge from attacks that have taken on increasingly ethnic dimensions as the fighting has continued. Four months into the conflict, UNMISS is hosting some 67,000 civilians at its bases.

As for today’s incident, the Mission also strongly condemned what it described as a “deadly and unprovoked” attack on its base in Bor.

In a press statement, the Mission said that a yet to be confirmed number of civilians were killed or wounded by the gunmen, who entered the grounds disguised as peaceful demonstrators intending to present a petition to UNMISS.

The Mission will publish the casualty figures once they are ascertained.

All UNMISS civilian, military and police staff are accounted for.

“UNMISS emphasizes the primary responsibility of South Sudanese to protect all its population and to maintain public order,” says the statement, which adds that the Mission also called on national, state and local authorities to thoroughly investigate “this tragic episode” and bring to justice the perpetrators of these heinous murders.

Further, the Mission called on the authorities and forces to protect all civilians, to ensure that the inviolability of UN premises is protected, and to take effective measures to prevent a recurrence of such attacks.

“UNMISS calls on all displaced persons sheltering in its bases to remain calm, exercise restraint, strictly respect the ground rules governing their stay in the camps and desist from any actions that may provoke violence,” the statement said.

The Mission reaffirmed its determination to use all necessary means to protect civilians facing violence, to protect United Nations personnel and assets, and to defend itself, in keeping with its mandate.

As for events unfolding in Unity state, in the north of the country, UNMISS says that it is gravely concerned about fighting that erupted in parts of the region on Monday, 14 April. “UNMISS Condemns these renewed hostilities in the strongest possible terms as serious violations of the cessation of hostilities agreement signed by the main parties to the crisis,” the mission said in a press statement.

According to the Mission, the fighting originated at a number of locations to the west and northwest of the state capital of Bentiu early Monday morning and by Tuesday, ant-Government forces had overrun the town and the nearby neighbourhood of Rubkona.

“As a result of the fighting, the number of internally displaced persons in the UNMISS compound has risen to 12,000”, the Mission says, adding that its peacekeepers patrolling the town had seen thousands of displaced persons gathered near the Bentiu Hospital and the UN World Food Programme (WFP) compound.

Later in the day, an UNMISS peacekeepers managed to get all remaining civilians out of the area and into a safe location at one of the Mission’s protection sites. 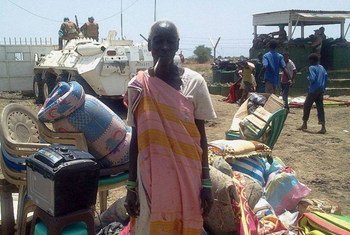 16 April 2014
Spiraling violence has forced an increasing number of civilians in South Sudan’s oil-rich Unity state are seeking refuge with the United Nations peacekeeping mission, it was confirmed today.