As the FIFA World Cup in Brazil draws closer, the United Nations agency leading the response to the AIDS epidemic today named the country’s football star David Luiz as a Goodwill Ambassador to raise awareness about HIV and drive young people to help end discrimination and commit to prevention.

“I want to use this position to spread the word about how to overcome AIDS around the world,” said Mr. Luiz, who plays in the Premier League team Chelsea, and who will be the vice-captain of the national Brazilian football team in the sporting event that starts in June.

“People will be looking to my country Brazil to see great football at the World Cup and this is a great opportunity for [the Joint UN Programme on HIV/AIDS (UNAIDS) ] and I to speak out—and I want to help make UNAIDS the winning team,” said the footballer, who is already part of the UNAIDS ‘Protect the Goal’ campaign.

The head of UNAIDS said Mr. Luiz’s “heart and compassion” will make a big difference in reaching millions of young people with important messages calling for an end to discrimination, advocating for HIV prevention and access to treatment.

“In football, players come together to produce results. In the same way we must unite, and, as a team, get to zero new HIV infections,” said Executive Director Michel Sidibé.

An estimated 780,000 of the total 2.3 million new HIV infections worldwide are among adolescents and young people aged 15–24 years, according to UNAIDS.

Of the total estimated 35.3 million people living with HIV around the world, an estimated 5.4 million are young people, many unaware of their status.

Mr. Luiz will also be promoting UNAIDS’ #zerodiscrimination campaign, which calls on people to celebrate everyone’s right to live a full life with dignity – no matter what they look like, where they come from or whom they love.

David Luiz teamed up with a butterfly sign to support Zero Discrimination. He says you can make a difference by joining the winning team of #zerodiscrimination. Credit: UNAIDS. More info http://ow.ly/t6q8V

“During the World Cup, everyone’s eyes will be on Brazil and David will be an inspiration both on and off the pitch,” Mr. Sidibé added.

Also today, the Government of Brazil announced a carbon neutral goal for the World Cup that would inspire other organizers to make high-profile climate action.

The Government is encouraging holders of carbon credits from the Clean Development Mechanism (CDM) – called certified emission reductions (CERs) – to donate them to the World Cup organizers to offset emissions from construction and renovation, consumption of fossil fuels from official and public transport, and other sources.

Each CER is equivalent to one ton of carbon dioxide. An estimated one million CERs or more is needed to offset the World Cup, the UN Framework Convention on Climate Change (UNFCCC) said, depending on what was covered in the calculation. That would be equivalent to taking nearly 300,000 passenger cars off the road for a year.

“Brazil's call for carbon credits to offset emissions from the world’s largest mass spectator event is a welcome move and part of a global trend by organizers to green big sporting events like football tournaments and the Olympics,” said Christiana Figueres, the UN’s top climate change official and Executive Secretary of the UNFCCC.

According to the UNFCCC, all donated credits must originate from Brazilian CDM projects.

Nearly 150 Brazilian CDM projects have issued more than 90 million CERs, of which an estimated 14 million could be available for donation.

“The smallest accepted donation is 5,000 CERs and donors will receive an official certificate acknowledging their contribution to offsetting the FIFA World Cup in Brazil,” UNFCCC reported.

It also cited media reports that FIFA is planning to offset the emissions of officials and fans by perhaps buying carbon offsets. 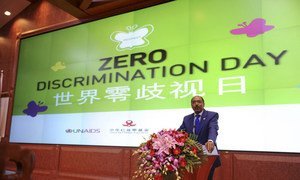 Ahead of Zero Discrimination Day, UN agency appeals for tolerance, dignity for all

“Zero Discrimination Day,” to be marked on 1 March, is a worldwide call to promote and celebrate everyone’s right to a full life with dignity – no matter what they look like, where they come from or whom they love, declared the United Nations agency leading the world’s HIV/AIDS response, as it kicked off celebrations with a major event in Beijing.