The United Nations Food and Agriculture Organization (FAO) announced today that PepsiCo has joined the Coca-Cola Company in giving its official support to a set of global guidelines that protect the rights of poor and vulnerable people to land, livelihoods and food security.

The United Nations Food and Agriculture Organization (FAO) announced today that PepsiCo has joined the Coca-Cola Company in giving its official support to a set of global guidelines that protect the rights of poor and vulnerable people to land, livelihoods and food security.

Initiated by FAO and endorsed by the Committee on World Food Security in 2012, the Voluntary Guidelines on the Responsible Governance of Tenure promote secure ownership rights and equitable access to land, fisheries and forests as a means of eradicating hunger and poverty, supporting sustainable development and protecting the environment.

The guidelines call for the commitment of both the public and private sectors, and include recommendations to safeguard local people’s rights in the event of large-scale land acquisitions, warding off land grabs.

According to a news release from FAO, PepsiCo has published a policy recognizing its obligations to respect and protect the rights of local people and encouraging its supplier countries to meet certain standards, including the principles listed in the Voluntary Guidelines.

In addition to fair and legal negotiations on land transfers and acquisitions in developing countries, the company has pledged to carry out social and environmental assessments across its global supply chains, beginning in Brazil, its top sugar-sourcing country.

PepsiCo is the second big beverage company to give its support to the guidelines after the Coca-Cola Company publicized a commitment to land rights in November 2013.

Working with Oxfam, Coca-Cola committed to help protect the land rights of communities and conduct assessments in some of the world’s top sugarcane-producing regions, in addition to implementing a zero tolerance stance on land grabbing.

Both the Coca-Cola Company and PepsiCo have vowed to increase their participation in the Committee on World Food Security to further demonstrate support of responsible land rights practices.

“Securing the official commitment and operational support of both PepsiCo and the Coca-Cola Company is tremendously significant for the implementation of the Voluntary Guidelines and we hope that more large private companies will follow their lead,” said Marcela Villarreal, Director of FAO's Office for Partnerships, Advocacy and Capacity Development.

For this purpose FAO is currently working on a private sector technical guide for the implementation of the Voluntary Guidelines, in collaboration with major private sector actors.

“FAO considers compliance with the voluntary guidelines as the baseline for all our partnerships, and we call on all of our current and potential partners to support them,” Ms. Villarreal said.

♦ Receive daily updates directly in your inbox - Subscribe here to a topic.
♦ Download the UN News app for your iOS or Android devices.
land|rights 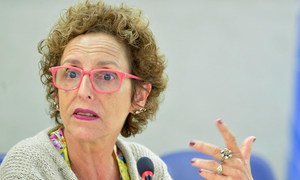 A group of United Nations independent human rights experts today called on the Vietnamese Government to “intervene urgently” in a case of forced eviction of the last remaining residents of Con Dau, a small village located on the outskirts of Da Nang city in the centre of the country.