15 April 2014
An independent United Nations human rights expert today urged Israel to prevent settlers from taking over Al-Rajabi House, a building in the West Bank city of Hebron that was built by Palestinian families but whose ownership was granted to the settlers after a protracted legal battle.

An independent United Nations human rights expert today urged Israel to prevent settlers from taking over Al-Rajabi House, a building in the West Bank city of Hebron that was built by Palestinian families but whose ownership was granted to the settlers after a protracted legal battle.

The four-story building capable of housing 40 families is located strategically between the illegal settlement of Kiryat Arba and the Ibrahami Mosque, also known as Cave of Patriarchs, in the old city of Hebron.

“This is the first time a new settlement in the heart of Hebron is created since the 1980s – and would add to the ordeal of the Palestinian community,” stressed the UN Special Rapporteur on the situation of human rights in the Palestinian territories occupied since 1967, Richard Falk.

“There could be nothing worse to stoke renewed violence than the creation of a new settlement in the heart of old Hebron,” he added in a news release.

Noting that three settler families have already moved into the building, Mr. Falk warned that this will likely mean “more movement restrictions for Palestinians in the area, more road closures, and more harassment of Palestinian residents and human rights defenders by settlers.”

According to the news release, settlers illegally occupied the building being built by Palestinian families in March 2007, and remained there until December 2008 when an Israeli Supreme Court decision evicted the settlers pending a thorough judicial review of ownership claims.

During that time, the UN and non-governmental human rights organisations witnessed a sharp rise in settler violence and harassment against Palestinian residents living in the close vicinity. The building was ordered to remain vacant after the Supreme Court ruling.

On 11 March 2014, the Supreme Court issued its final decision rejecting an appeal submitted by Palestinians, and ruled in favour of settler ownership of the house. These settlers moved into Al-Rajabi house on Sunday after the Israeli Minister for Defense gave the green light.

“Hebron embodies all the worst features of apartheid, colonialism and oppression that are to be found throughout occupied Palestine,” Mr. Falk noted, as he described a divided town of “checkpoints, walls, barbed wires and apartheid roads” where settlers and Palestinians are kept apart despite living within metres of each other.

The Special Rapporteur noted that the residents of the largest nearby settlement, Kiryat Arba, were among the most extreme and ideologically motivated settlers in the West Bank, and has given rise to numerous incidents of violence over the years.

Besides Kiryat Arba, Mr. Falk recalled, there are already several small Israeli settlements in or near the old city of Hebron that have created severe restrictions and an atmosphere of continuous tension that adversely affects all Palestinians.

“This unacceptable situation is aggravated by a lack of law enforcement by Israeli security forces,” he said. “What once was a vibrant market in the heart of Hebron is now a ghost town.”

He went on to state that the establishment of settlements in the West Bank is a clear violation of international law and contravenes the Fourth Geneva Convention, and noted that the UN International Court of Justice had come to the same conclusion in an advisory opinion issued 10 years ago.

“Israel must take steps to comply with international law and ensure that tensions – already high in Hebron – do not get out of control,” Mr. Falk urged.

Mr. Falk added that the establishment of this settlement at Al-Rajabi House was a move toward connecting the illegal settlement of Kiryat Arba with the other outposts in the old city of Hebron and the Ibrahami Mosque (or Cave of Patriarchs) – the site of the 1994 massacre of Palestinians during prayer time by a settler from Kiryat Arba.

Independent experts or special rapporteurs are appointed by the UN Human Rights Council in Geneva to examine and report back on a country situation or a specific human rights theme. The positions are honorary and the experts are not UN staff, nor are they paid for their work. 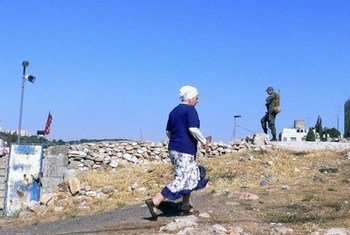 14 June 2013
Calling reported ongoing settlement construction in the West Bank “unhelpful” and a “deeply worrisome trend,” Secretary-General Ban Ki-moon today renewed his calls on Israel to heed the global community to freeze settlement activity and abide by its commitments under international law.