UN
A makeshift memorial to those killed and injured during recent demonstrations in Kiev, Ukraine. (February 2014).
15 April 2014

While corruption and widespread inequality were among the root causes of the massive street protests that erupted last year in Ukraine, the fear-mongering and incitement to hatred that have followed must be urgently countered to avoid further escalation of tensions in the country, states a United Nations human rights report issued today.

“Facts on the ground need to be established to help reduce the risk of radically different narratives being exploited for political ends. People need a reliable point of view to counter what has been widespread misinformation and also speech that aims to incite hatred on national, religious or racial grounds,” said UN High Commissioner for Human Rights Navi Pillay, who’s Office (OHCHR) released the report.

The report comes amid what senior UN officials describe as a “serious deterioration” of the situation in Ukraine. At an emergency meeting of the UN Security Council this past Sunday, Assistant Secretary General for Political Affairs, Oscar Fernandez-Taranco described the country as “teetering on the brink” after “well-armed and well-organized” armed groups began seizing Government buildings in cities throughout eastern Ukraine.

For months, Secretary-General Ban Ki-moon has been calling for restraint and for a direct and constructive dialogue between Kiev and Moscow. As part of his efforts, the UN chief spoke yesterday to Ukraine's acting President, Oleksandr Turchynov, to express his great concern over the ongoing disturbances and notably the reports of civilians being armed and activity by armed groups on both sides.

Earlier today, Mr. Ban spoke by phone with Russian President Vladimir Putin and expressed alarm about the highly volatile situation in eastern Ukraine and underlined that any deepening of the crisis would be profoundly detrimental for all concerned; hence the need for everyone to work to de-escalate the situation.

Looking at the root causes of the protests that have taken place in the Ukrainian capital, Kyiv, and elsewhere since November 2013, including corruption, widespread economic inequality, lack of accountability for human rights violations and weak rule-of-law institutions, the OHCHR report also anticipates and draws parallels between the events unfolding in eastern Ukraine and what happened in Crimea – where a referendum was held in mid-March and voters decided that the regions should join Russia – and makes recommendations.

“It is critical for the Government to prioritize respect for diversity, inclusivity and equal participation of all – including minorities – in political life,” stressed Ms. Pillay in a news release.

The report analyses events up to 2 April and is based on information collected during two missions to Ukraine in March by Assistant Secretary-General for Human Rights Ivan Šimonovic and a team of UN human rights monitors on the ground since 15 March.

“In eastern Ukraine, where a large ethnic Russian minority resides, the situation remains particularly tense,” the report says. “It will be important to immediately take initial measures to build confidence between the Government and the people, and among the various communities, and reassure all people throughout Ukraine that their main concerns will be addressed.”

The report further notes that excessive use of force by the Berkut special police and other security forces led to the radicalization of the protest movement and that “violations related to the Maidan protests should be investigated and addressed in order to ensure accountability of perpetrators”.

Information gathered so far indicates that 121 people were killed in violence between December 2013 and February 2014 following severe beatings, acts of torture and other cruel, inhuman or degrading treatment that were reportedly attributed to the Berkut.

Concerning the referendum of 16 March, which the UN General Assembly declared invalid, the report sets out a number of concerns, pertaining to freedom of expression, freedom of assembly and other civil and political rights. The presence of paramilitary and so-called self-defense groups as well as soldiers without insignia, was not conducive to an environment in which the will of voters could be exercised freely, and the UN Human Rights’ Office delegation received many reports of vote rigging.

“A number of measures taken in Crimea are deeply concerning from a human rights perspective,” the report says. These include the introduction of Russian citizenship, making it difficult for those who opt to maintain their Ukrainian citizenship to stay in Crimea. “The current situation also raises concerns with regard to land and property ownership, wages and pensions, health service, labour rights, education and access to justice,” the report explains.

It is widely assessed that while there were some attacks against the ethnic Russian community, these were neither systematic nor widespread, according to the Human Rights agency. There are also allegations that some participants in the protests and clashes in eastern Ukraine were not from the region, and that some had come from Russia.

Additionally, OHCHR urges the authorities in Crimea to publicly condemn all attacks or harassment against human rights defenders, journalists or any members of the political opposition, and ensure full accountability for such acts, through prompt, impartial and effective investigations and prosecutions.

“What is clear from our findings is that there is an urgent need to ensure full respect for the rule of law and human rights in Ukraine and thus guarantee the enjoyment of all human rights for all, including minorities,” Ms. Pillay said.

The report offers a list of recommendations to the Ukrainian Government including accountability on recent human rights violations, equal participation, prevention of media manipulation, fight against intolerance and extremism, and corruption eradication.

To the authorities in Crimea, the report advises that cases of missions persons be resolved, access be granted to detention centres, rights of the persons, minorities and indigenous people be protected, and allegations of hate speech and propaganda be investigated.

“The international community, including the UN, can play a role in supporting the creation of such an environment. My Office and its monitoring team can provide impartial and authoritative human rights assessments to contribute to establishing the facts, de-escalating tension, and paving the way for an environment that is conducive to the holding of free and fair elections on 25 May,” said Ms. Pillay.

The next report should be issued by the Human Rights Monitoring Mission in Ukraine (HRMMU), around 15 May and will examine in greater depth the situation in eastern Ukraine. 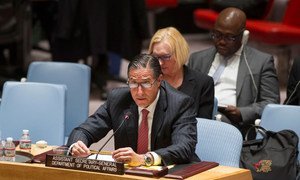 In the wake of the violent clashes that have swept eastern Ukraine over the past 24 hours as pro- and anti-Government demonstrators have faced off in the region, a senior United Nations political official warned the Security Council this evening that the crisis will only deepen unless intensive efforts are made by all sides to de-escalate the situation.