The United Nations Food and Agriculture Organization (FAO) is warning countries to step up monitoring, reporting and prevention to tackle one of the world’s most destructive banana diseases, Fusarium wilt, which recently spread from Asia to Africa and the Middle-East, and is now menacing Latin American countries.

According to FAO, banana is the eighth most important food crop in the world and the fourth most important food crop among the world’s least-developed countries, and the TR4 race of the disease – also known as Panama disease – is posing a serious threat to production and export of the popular fruit, with grave repercussions for the banana value chain and livelihoods.

“Any disease or constraint that affects bananas is striking at an important source of food, livelihoods, employment and Government revenues in many tropical countries,” said Gianluca Gondolini, Secretary of the World Banana Forum which is based at FAO headquarters and promotes sustainable banana production and trade.

“The spread of Fusarium wilt could have a significant impact on growers, traders and families who depend on the banana industry,” said FAO plant pathologist Fazil Dusunceli, adding that “countries need to act now if we are to avoid the worst-case scenario, which is massive destruction of much of the world’s banana crop.”

While other races of the disease have existed for many years, TR4 has caused significant losses in banana plantations in Southeast Asia over the last two decades, and has recently been reported in Mozambique and Jordan. TR4 infects the Cavendish banana varieties, which dominate global trade, as well as other susceptible varieties used for local consumption and markets. Despite damage to the banana plant and to production, the fruit itself remains edible.

Fusarium wilt is caused by the fungus Fusarium oxysporum f.sp. cubense (Foc). The disease is soil-borne and the fungus can remain viable for decades. Once the disease is present in a field, it cannot be fully controlled by currently available practices and fungicides. The best way to fight the disease is to prevent its spread, which includes avoiding movement of diseased plant materials and infected soil particles.

“We need to raise awareness of this threat, coordinate efforts among countries and institutions for effective implementation of appropriate quarantine measures, and also work with banana producers, traders, plantation employees and smallholder farmers to help to minimize the spread of the disease,” Mr. Dusunceli said. He also highlighted the importance of research in better understanding the disease and developing alternative varieties that are disease resistant.

FAO stresses the importance of using disease-free seedlings and avoiding movement of infected soil and planting materials into, and out of, farms, through transportation, visitors or other means. “A concerted effort is required from stakeholders including the industry, research institutions, governments and international organizations to prevent spread of the disease,” the agency’s information brief reads.

To raise awareness, this issue will be on the agenda of a series of upcoming meetings in Kenya, South Africa, and Trinidad and Tobago, with the aim of addressing a range of issues related to TR4, including developing action plans for its prevention, monitoring and containment.

The banana crop is vulnerable to a number of diseases in various parts of the world, including the Black Sigatoka disease, Xanthomonas Wilt (BXW), Bunchy Top Disease (BBTD) and Fusarium Wilt, but Fusarium’s soil-borne nature makes it especially challenging.

At the country level, FAO is issuing a series of recommendations, among them: awareness-raising at all levels and adoption of appropriate risk assessment with surveillance and early warning systems; phytosanitary measures to prevent the spread of the disease through agricultural practices, irrigation and drainage systems, containers, tools or visitors; and preventive measures, including quarantines, the use of disease-free planting materials, prevention of movement of infected soil and planting materials into and out of farms, and disinfection of vehicles. 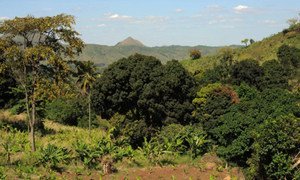 From farming to forestry and fisheries, agriculture greenhouse emissions have nearly doubled over the past 50 years and may increase by another 30 per cent by 2050, according to new estimates out today from the UN Food and Agricultural Organization (FAO).