Marking the Global Day of Action on Military Spending, the United Nations independent expert on the promotion of a democratic and equitable international order called on all governments to boost transparency and cuts in military expenditures, and increase investments in nutrition, health, environmental protection and other major sustainable development challenges.

“Every democracy must involve civil society in the process of establishing budgets, and all sectors of society must be consulted to determine what the real priorities of the population are,” Special Rapporteur Alfred de Zayas said in a statement. “Lobbies, including military contractors and other representatives of the military-industrial complex, must not be allowed to hijack these priorities to the detriment of the population’s real needs.”

The expert urged world parliaments to implement the will of the people, based on representative opinion polling, and significantly reduce all military expenditures (arms production, military research, military bases abroad, surveillance of private citizens, ‘intelligence’-gathering, or overt and covert military operations).

According to the Stockholm International Peace Research Institute, global military spending levels are at an all-time high, reaching a total of $1.75 trillion in 2012, a number that Mr. de Zayas says constitutes “an unconscionable use of resources.”

“In a world where millions of human beings live in extreme poverty, die of malnutrition and lack medical care, where pandemics continue to kill, it is imperative to pursue good faith disarmament negotiations and to shift budgets away from weapons production, war-mongering, and surveillance of private persons, and devote available resources to address global challenges including humanitarian relief, environmental protection, climate change mitigation and adaptation, prevention of pandemics, and the development of a green economy,” he said.

Mr. de Zayas highlighted that such a shift in States’ spending habits is key to achieving the UN post-2015 development agenda.

“I am surprised that in the current context of global socio-economic crisis, few have voiced indignation regarding the disproportionate levels of military spending. The place to exercise austerity is in wasteful military expenditures, not in social protection,” he insisted.

The Special Rapporteur urged governments to “considerably reduce funds allocated to the military, not only as a disarmament issue, but also as a potential contributor to social and environmental protection,” and called for “the holding of referenda on this issue worldwide.”

Estimating that a 10 per cent annual reduction in military expenditures would be “reasonable,” Mr. de Zayas also encouraged all States to contribute to the UN’s annual Report on Military Expenditures by submitting complete data on national defence budgets.

Independent experts or special rapporteurs are appointed by the UN Human Rights Council in Geneva to examine and report back on a country situation or a specific human rights theme. The positions are honorary and the experts are not UN staff, nor are they paid for their work.

♦ Receive daily updates directly in your inbox - Subscribe here to a topic.
♦ Download the UN News app for your iOS or Android devices.
weapons 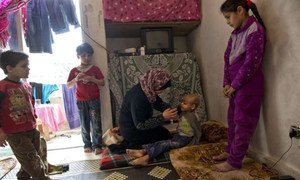 Now in its fourth year, the Syrian conflict hit yet another bleak milestone today, as the United Nations refugee agency reported that the number of displaced seeking refuge in neighbouring Lebanon has passed the one million mark, putting more pressure on a host community that is already stretched to the breaking point.