In the wake of the violent clashes that have swept eastern Ukraine over the past 24 hours as pro- and anti-Government demonstrators have faced off in the region, a senior United Nations political official warned the Security Council this evening that the crisis will only deepen unless intensive efforts are made by all sides to de-escalate the situation.

“Once again, the situation in Ukraine has seriously deteriorated…and as of now, [the country] teeters on the brink,” UN Assistant Secretary-General for Political Affairs, Oscar Fernandez-Taranco said as he briefed an emergency meeting of the Council on the fallout from the latest escalation in the country, which began on 6 April, shattering two weeks of “relative” quiet.

He said that as the Council gathered for the 10th time this year to discuss this issue, Lugansk, Kharkiv and Donetsk and, in the last 24 hours, at least 5 other cities in Ukraine's east have been targeted by uprisings and the seizure of Government buildings.

According to media reports, which suggest large numbers of Russian troops deployed along the border with Ukraine, in the city of Slavyansk where the police station was seized, protesters demanded a referendum on autonomy similar to the poll in Crimea last month, in which voters opted to secede from Ukraine.

Mr. Fernandez-Taranco said that UN monitors on the ground cited armed civilians on both sides, as well as militiamen armed with AK-47's and sniper rifles among the “well-armed and well-organized” groups that consistently reinforced barricades along roads in the cities where the uprisings had occurred, adding that monitors also reported dueling protests where at least 50 people were apparently hurt.

He went on to tell the Council that as of today, at least one Ukrainian officer had reportedly been killed in the latest round of violence, but the exact number of those injured during the skirmishes was not known as of now.

Amidst these events, he said, Ukraine's Acting President Oleksandr Turchynov had issued a decree giving the self-declared separatists until 6:00 a.m. (local time) to give up their weapons in order to avoid prosecution.

Mr. Fernandez-Taranco said that Ukrainian authorities had vowed that if illegal activities are not halted, a full scale operation involving the Ukrainian army would be deployed. Russia has publicly stated on more than one occasion that it would be forced to act if Kyiv were to use force against demonstrators in the east.

“The situation is therefore now more combustible than ever,” he said, emphasizing that Secretary-General Ban Ki-moon and the UN remain committed to a peaceful solution "to this ever deepening crisis". Indeed, earlier in the day, Mr. Ban had urged maximum restraint and adherence to international law.

He said the UN chief was also appealing for direct dialogue between the parties and between Kyiv and Moscow to de-escalate the situation. he was also calling on all those with influence on the parties to help resolve the crisis peacefully. “It has become painfully evident that the crisis will continue to deepen if intensive efforts are not urgently employed to de-escalate the situation,” he said.

Warning against a spillover of "potentially severe consequences," Mr. Fernandez-Taranco said that if the concerned parties – and the world – do not come together to resolve the crisis, not only would Ukraine and Russia bear the brunt, European nations and the wider international community would be impacted as well.

Months of political unrest in Ukraine led to the removal by Parliament of President Viktor Yanukovych in February, followed by increased tensions in the country's autonomous region of Crimea, where additional Russian military were subsequently deployed and a secession referendum was held in mid-March, in which the majority of the region's people voted to join Russia.

Mr. Ban and other senior UN officials have been leading the push for a diplomatic resolution to the crisis. After returning from the region in late March, he called for a solution based on the principles of the UN Charter and warned the concerned parties – and the wider international community – that “at this time of heightened tensions, even small sparks can ignite larger flames of unintended consequences.” 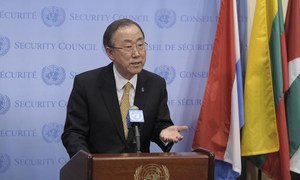 Reiterating his strong call for a diplomatic solution to the crisis over Ukraine, United Nations Secretary-General Ban Ki-moon this evening warned the concerned parties – and the wider international community – that “at this time of heightened tensions, even small sparks can ignite larger flames of unintended consequences.”