The United Nations Food and Agriculture Organization (FAO) today called for urgent support for farmers and herders in Sudan in order to help prevent a further worsening of the food security situation in the country.

The agency said in a news release that some 3.3 million people are currently suffering from food insecurity with numbers likely to rise to 4 million in the coming months due to a combination of increased conflict and displacement in Darfur, refugee movement from neighbouring South Sudan, poor harvest and spiralling food prices.

In some areas of Sudan, existing crisis levels of food insecurity are expected to deteriorate to emergency levels in the coming few weeks, bringing an even higher degree of acute malnutrition with devastating consequences for vulnerable groups.

“Sudan is a forgotten crisis that is only getting worse,” said Abdi Adan Jama, the FAO Representative in the country. “We urgently need to ensure vulnerable herders and farmers affected by the situation are in a position to regain their livelihoods, feed their families, reduce their dependency on food aid and rebuild their lives.”

UN agencies and partners have so far received only 3.5 per cent of the $995 million that they requested to carry out urgent humanitarian interventions set out in the Strategic Response Plan for Sudan in 2014.

“About 80 per cent of Sudan’s rural population relies on agriculture for their food and income, and if we do not recognize the magnitude of what is happening and act in time the situation will get much, much worse,” warned Mr. Jama.

FAO is calling for $19 million for a series of urgent interventions targeting a total of 5.4 million people. So far it has received only $7 million, leaving a funding gap of $12 million.

The agency plans to provide 900,000 of the most vulnerable households with livelihood-saving support. This includes multipurpose crops which not only respond to the nutritional needs of families but also protect soil, provide fodder for livestock to sustain milk production, and offer good prices on markets.

High quality and early maturing seed will be provided for the two staple crops, sorghum and millet, and FAO will work to diversify the food basket of affected families by promoting legumes, sweet potato, milk production, and vegetables that can be grown in the rainy season, enabling vital access to supplementary income.

In addition, the Food Security and Livelihoods Cluster, co-led by FAO, plans to vaccinate 11.7 million heads of livestock and ensure supplementary feeding and improved access to pasture and water, which will secure the survival of these important productive assets. 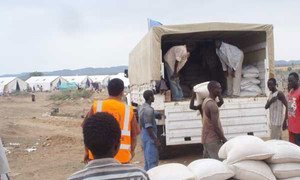