UNHCR/L. Taylor
Young forcibly-displaced Roma from south-east Europe. Many have no citizenship which affects their daily lives.

8 April 2014
On International Roma Day, the United Nations independent expert on minority issues is calling on all European countries and institutions to fully include Roma people in their decision-making processes at all levels.

“Europe cannot stand for exclusion,” said UN Special Rapporteur Rita Izsák, adding that with upcoming European Parliament and other national elections, now is the time to call on Governments and international organizations to step-up their efforts and attention to ensuring the full integration of their Roma populations, including in decision-making bodies at all levels.

She went on to stress that political parties have a responsibility to promote the importance of minority rights protection in line with international standards, including the UN Declaration on the Rights of Persons Belonging to National or Ethnic, Religious and Linguistic Minorities and European human rights standards.

“With a rising tide of anti-Roma sentiment and hostility against Roma throughout Europe, it is a primary duty of politicians from across the political spectrum to ensure the inclusion of Roma as well as promoting understanding and tolerant societies,” said Ms. Izsák, emphasizing that they must clearly condemn anti-minority propaganda and hate speech and protect Roma, as well as other excluded groups, from being negatively stereotyped and treated as scapegoats.

She noted that in many countries, the number of Roma intellectuals and leaders both in Government and civil society is rising, including young people and women. They are “passionate and talented advocates not only for the rights of Roma, but about ensuring fair and just societies for all,” said Ms. Izsák.

“It is high time for Roma to be considered as full partners in society, with much of value to contribute, and not only as beneficiaries or as a problem to be solved,” she said, regretting that according to recent reports, the number of Roma speakers in high-level meetings about Roma inclusion is still limited.

Calling for “stronger outreach to encourage Roma to get more involved in politics and engage in active citizenship,” Ms. Izsák said that “electoral systems should be reformed and positive measures taken so that Roma have a real possibility for meaningful representation.” 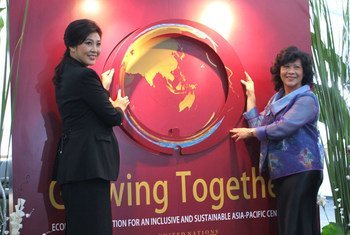 7 March 2014
When the United Kingdom’s former Foreign Secretary, Sir Geoffrey Howe, was visiting Pakistan during Benazir Bhutto’s term as Prime Minister, his wife asked a little boy what he would like to be when he grew up. “A truck driver, maybe,” mused the child. Surprised at his modest ambitions, Lady Howe persisted: “But surely you would like to go into politics, even become Prime Minister?” Back came the answer, “No, that’s women’s work.”