OCHA/Peter Iroga
Old Mataniko River Bridge in the Solomon Islands was swept away after flash flooding in the capital Honiara.

7 April 2014
The United Nations and its partners in the Pacific have begun deployments to Honiara today in support of the Solomon Islands’ Government response to what is considered to be “the worst floods ever seen in the country,” killing at least 23 people and affecting another 50,000 across the country.

According to a report by the UN Office for the Coordination of Humanitarian Affairs (OCHA), heavy rain from a tropical depression caused severe flooding in Honiara after the Mataniko River burst its banks, washing away homes and bridges.

On Saturday, the Government requested the support from OCHA, as well as the deployment of all Pacific Humanitarian Team (PHT) clusters. A partnership of UN agencies, Red Cross, regional and bilateral organizations, and non-governmental organizations (NGOs), the PHT was set-up by OCHA in 2008 to ensure a regional responders work together in Pacific disasters.

Ms. Osnat Lubrani, UN Resident Coordinator for the Solomon Islands and co-chair of the PHT, is in Honiara to meet with the Government, donors and humanitarian partners to determine where PHT expertise and supplies are most needed.

“We express our deepest sympathies to the Government and people of the Solomon Islands for the loss of life and destruction of homes and infrastructure,” said Ms. Lubrani, expressing PHT’s commitment “to working with the Government across all response areas, including coordination, shelter, health, water and sanitation.”

Donald Burgess, from UNICEF Water, Sanitation and Hygiene Specialist (WASH) in Honiara said, “At this stage, our priorities lie is making sure that the estimated 12,000 people spread out between 14 evacuation centres are safe and have adequate access to water, food and other non-food items such as blankets and sleeping mats.”

Sune Gudnitz, the head of OCHA’s office in the Pacific is in Honiara, calling on the international community for support. He explained that funds are urgently needed “to assist the affected population, who are from some of the poorest urban and remote communities of the country.”

UNICEF New Zealand Executive Director Dennis McKinlay explained that “the fact that the weather has cleared enough for initial assessments to be undertaken is a huge positive. Some shops are also up and running but warn they only have enough stockpiled to last a few weeks. Food security will be a huge concern in the coming weeks,” he noted.

Aid workers must be seen as strictly humanitarian, not political - UN relief chief 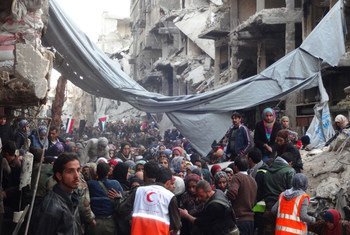 31 March 2014
Relief aid should anticipate and prevent – not just react and treat, the United Nations Office for the Coordination of Humanitarian Affairs (OCHA) declares today in a new report that challenges humanitarian and development actors to change the way they operate, and aims to kick-start an urgent global dialogue on preventing crises through effective risk management.