FEATURE: 'The ballot is the best weapon Afghan women have,' says UN

UNAMA/Fardin Waezi
Women from civil society participating in discussions in the run-up to the 5 April 2014 elections in Afghanistan.
4 April 2014

When you click on the official website of the Independent Election Commission (IEC) of Afghanistan, the clock is literally ticking down to Saturday, 5 April – the day millions of Afghans will vote in landmark elections whose credibility rests on the full participation of women.

This is a historic election and the first time that power is to be transferred from one democratically elected leader to another. This is also the first Afghan election under full control of the Afghan authorities. It may prove to be a watershed in terms of female participation as well.

”It is encouraging that 35 per cent of newly-registered voters are women, more than 300 women are standing as candidates for the Provincial Council polls and three women are standing for the Vice-Presidency,” said Nicholas Haysom, the deputy head of the UN presence in Afghanistan, known by the acronym UNAMA.

According to Haysom, who serves as the Deputy Representative of the Secretary-General in that country, "We think the ballot is the best weapon that women have to place their concerns on the table and to have them addressed.”

Secretary-General Ban Ki-moon has urged Afghans to “to have their say on the future direction of their country.” Denouncing violence by any group, the UN chief specifically condemned statements by the Taliban threatening further attacks on civilian election workers, candidates, observers, voters and election sites.

On Friday, reports emerged that two international journalists covering the elections were killed in what was termed an “abhorrent attack” by the UN's top official in Afghanistan, the Secretary-General's Special Representative, Jan Kubiš. This was the latest in a recent spate of attacks, most of which have targeted election facilities in Kabul and elsewhere in the country.

Despite these security threats, the enthusiasm of Afghan women candidates, registered voters and campaign supporters is evident in the flood of images being posted on on-line media of Afghan women – many veiled but many not – at rallies and in lines waiting to register to vote across the country.

Ms. Anar Gul, who registered to vote in Paktia province in eastern Afghanistan, is one of them: “If we don't participate in the election and choose our destiny, this nation will not get better. Our one vote could change the future of Afghanistan,” Ms. Gul told UNAMA. “Our voting in the elections will help this country walk forward towards democracy and prosperity.”

Another registered voter, Ms. Nargis from the northern province of Mazar-i-Sharif, seemed hopeful: “I am optimistic about the elections. I am asking my countrymen and women to participate in the elections. I will participate and choose a person worth voting for who serves the people and builds the country,” she said.

Jan Kubiš commented that “it would not be conceivable to think about good quality elections without good participation of women.”

Unlike the first-ever democratic elections in Afghanistan in 2004 and 2005, which were conducted jointly by the Afghan authorities and the United Nations with large-scale international assistance, the UN does not formally have a role in the April 5 Afghan-led, Afghan-managed electoral process.

Instead, the United Nations – primarily through UNAMA and the UN Development Programme (UNDP) – has been supporting Afghan authorities and the independent electoral bodies by advising on election-related matters and providing capacity building and technical support.

To encourage women to vote, more than 40 per cent of the over 21,000 polling stations in the country have been specified for women so that they can cast their votes without difficulty. The training of more than 5,500 voter registration staff has included 34 per cent women. And the push to get women to vote received a push on Afghan airwaves by broadcasting the importance of the women's vote to more than 16.7 million radio listeners and 2.7 million television viewers in Dari and Pashto.

The Independent Electoral Commission, which oversees the April 5 vote, has a section devoted to “Women and the Vote” that underscores the fundamental right of women to vote as men do, explaining that it is “their primitive right.” It also reassures women that photos are “non-obligatory” on their voting cards, and security checks will be conducted by female staff.

According to the Commission, more than 20 million Afghans are registered to vote. Of that figure, at least 3.8 million are new voters, including more than 1.3 million new women voters who registered for Saturday's elections.

Afghan security officials have assured the public that they are “fully prepared” to ensure a smooth vote in a secure environment. They say some 152,000 national army and police force members have fanned out across the country to ensure the security of voters during the polls and to respond to any insurgent attack.

Secretary-General Ban Ki-moon has said he is encouraged by the technical and security preparations and broad public engagement for the vote that takes place tomorrow. He also welcomed Afghan ownership of the electoral process and called upon Afghan institutions to discharge their responsibility to deliver credible, inclusive and transparent elections. 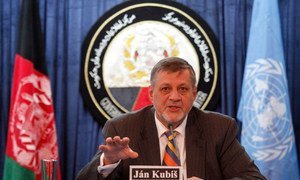 A senior United Nations official today urged Afghans to use this Saturday’s presidential and provincial council elections to shape the future of the country through peaceful, democratic means.