“Since the Millennium Development Goals were launched, we have seen proof that fighting malaria is a good investment that saves lives and speeds up economic progress,” said Mr. Ban earlier today at an African Union-sponsored Roll Back Malaria event in Brussels.

The Secretary-General, who has been in Brussels much of this week holding talks with European Union (EU) and African Union (AU) officials on a host of pressing global issues, said in a 12-year period, larger-scale malaria interventions saved 3.3 million lives, 90 per cent of which were children.

As the 2015 deadline for reaching the Millennium Development Goals (MDGs) approaches, Mr. Ban urged countries to boost their funding for malaria control. As of 2012, only half of the $5 billion needed to reach everyone had been funded.

“As one [World Health Organization] official put it, this “half” amount can be seen as a glass half full or half empty,” said the UN chief. “We would all prefer to see the glass half full. But for too many people, the glass is half empty. This is true for parents who have no nets to cover their children and patients who cannot get treatment. It is also true for the displaced families who run from conflict after so much loss – and then have to struggle against malaria as well.

The Secretary-General went on to explain that malaria affects primarily the most vulnerable populations such as children and displaced persons. “Eight out of every ten [Central African] refugees arriving in Cameroon are affected by malaria and other diseases,” he deplored, adding that “even in secure parts of Africa, where governments are strong and societies are at peace, hundreds of thousands of people fall ill and die from preventable diseases every year.”

Mr. Ban applauded the efforts made to “fill the glass” by the Roll Back Malaria UN-partnering campaign. The initiative is the global framework to implement coordinated action against malaria. It mobilizes for action and resources and forges consensus among partners.

“We need to ensure that Governments, bilateral and multilateral donors, and private sector contributors increase their levels of funding to support all needed efforts to address malaria around the world,” concluded Mr. Ban, as he called “on all partners to contribute to health interventions now that will save costs and lives in the future.” 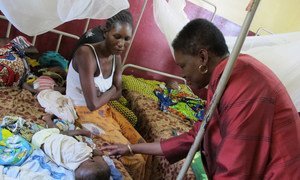 With about half of the health facilities in strife-torn Central African Republic (CAR) having been looted, the United Nations today appealed for immediate additional resources to scale up efforts to meet the country’s significant health needs.