3 April 2014
The cost of food worldwide has surged in March to its highest peak in 10 months, the United Nations Food and Agriculture Organization (FAO) reported today.

In a news release, agency said that its most recent Food Price Index, which measures the monthly change in international prices of a basket of 55 food commodities, including meat, dairy, sugar, and cereals, went up 4.8 points or 2.3 per cent, averaging now 212.8 points. This is the highest it has been since May 2013.

"The Index was influenced, as expected, by unfavourable weather conditions in the US and Brazil and geopolitical tensions in the Black Sea region," said Abdolreza Abbassian, FAO Senior Economist.

"The Food Price Index looks at March trends. Since then, the initial fear over disruptions in grain shipments from Ukraine has subsided. Also, markets have started to discard any negative impacts that the current difficult domestic economic conditions may bear on plantings or harvests in 2014," Mr. Abbassian said.

The report indicated an increase in all commodity groups except dairy, which fell 2.5 per cent for the first time in four months, averaging 268.5 points, as purchases by China declined, and amid uncertainty over trade with the Russian Federation. Good production in New Zealand and the northern hemisphere also influenced prices.

The greatest gain was seen in sugar, which rose 7.9 per cent, to a 253.9 point average. Concerns of declining availability from Brazil and Thailand, due respectively to drought and reduced sugarcane output and the expected impact of El Niño conditions later this year contributed to the price surge.

Concerns over the effects of dry weather conditions on winter wheat in the United States, unfavourable weather in Brazil, and tensions in the Black Sea region, caused a 5.2 per cent surge in cereal prices, bringing the average to 205.8 points. While in March the Index rose to its highest value since August 2013, it remained well below (34.6 points or 14.4 per cent) its March 2013 value. Rice prices were generally stable.

The vegetable oil price index, at its highest since 18 months, averages 204.8 points in March, up another 7 points from February. The rise in the index mainly reflected a surge in palm oil, on continued concerns over the impact of protracted dry weather in Southeast Asia.

As for the meat index, once again, the weather came into play as higher beef prices were associated with dry weather conditions affecting production in both Australia and the United States. Pork also rose, in part on concerns over the effect of the Porcine Epidemic Diarrhoea virus on export supplies in the United States. The meat index is now at an average of 185 points, up 2.7 points.

Global food prices fall, but still significantly higher than a year ago – UN 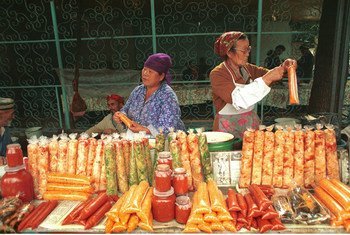 6 March 2014
Global food prices in February rose to their highest level since mid-2012 as a result of unfavourable weather and increased demand, the United Nations food agency today reported.