UN Photo/Paulo Filgueiras
A view of the Security Council as it voted on a resolution to revise the strategic priorities of the African Union-UN Hybrid Operation in Darfur (UNAMID).
3 April 2014

Unanimously adopting a new resolution, the Council endorsed the revised priorities for the mission (UNAMID) outlined in Mr. Ban’s special report on the outcome of a three-phase, inter-agency review carried out last year on the mission’s work, its much-changed operating environment and its efforts to achieve its mandate.

In that report, the Secretary-General notes that the “political and economic marginalization of Darfur by Khartoum continues to fuel the armed rebellion,” while inter-communal violence has increased. Further, the political environment in and around Sudan has changed since UNAMID was set up.

“New conflict dynamics have emerged and old ones remain unaddressed,” states the UN chief, explaining that in such a context, the mission’s strategic priorities need to be revised to reflect the changing environment and to increase its effectiveness.

The strategic revisions to UNAMID he recommends, endorsed by the Council today, are: mediation between the Government and non-signatory armed movements on the basis of the Doha Document for Peace in Darfur; the protection of civilians, the facilitation of the delivery of humanitarian assistance and the safety and security of humanitarian personnel; and the provision of support, in conjunction with the UN Country Team, to the mediation of community conflict, including through measures to address its root causes.

For its part, the Council requests UNAMID to focus and streamline its activities, across its military, police and civilian components in order to achieve progress on these three strategic priorities. The 15-nation body recognized that their effective implementation will require certain tasks of the mission to be deprioritized and requested Mr. Ban to include these tasks in his next regular report on UNAMID.

The Council took note of the Secretary-General’s proposed adjustment of benchmarks and indicators for UNAMID outlined in the report, requesting that they be further refined to reflect the strategic priorities.

Further echoing the Secretary-General’s report, the Council noted that UNAMID faces three major challenges in the effective discharge of its mandate, in light of the evolving political and security environment: the cooperation and partnership of the Sudanese Government in mandate implementation; major shortfalls in several troop- and police-contingent operational capabilities; and the need for improved coordination and integration structures within UNAMID, and between UNAMID and the UN Country Team.

As such, the Council requested that UNAMID identify, in the context of these challenges, steps by which it will achieve its revised strategic priorities more effectively, and further requested Mr. Ban to report on these steps in his regular reports to the Council on the mission’s work.

Throughout the resolution the Council expresses concern at the impact of deteriorating security on the civilian population, including the significant increase in population displacements in 2013, and the consequent increase in humanitarian and protection needs. The Council expresses particular concern at reports of an escalation of violence in Darfur since February, resulting in massive population displacement, and at the denial of access for UNAMID and humanitarian actors to the affected areas by the Sudanese authorities.

Just last week, Ali Al-Za’tari, UN Resident and Humanitarian Coordinator in Sudan, highlighted the instability in Darfur, warning that a wave of violence swept the region in February, impacting civilians as well as the international community’s ability to help those affected. The UN estimates that since the beginning of 2014, more than 215,000 people have been driven from their homes. 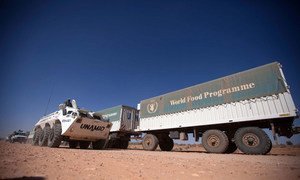