UNICEF/2014/Elder
With the rainy season looming, UN agencies are racing against time to deliver emergency aid to South Sudan.

3 April 2014
With no political solution to the conflict that has torn South Sudan apart in sight, senior United Nations officials working in the country stressed today that they are in a “race against time” ahead of the rainy season to help prevent a health and hunger catastrophe.

Hilde Johnson, the Secretary-General’s Special Representative and head of the UN peacekeeping mission in South Sudan (UNMISS), told a news conference in the capital, Juba, that plans are under way to establish alternative sites for tens of thousands of civilians who sought protection in UN compounds.

It is estimated that 70,000 civilians are currently sheltering at UN compounds around the country which opened its gates to offer protection when the fighting between Government and opposition forces began in mid-December 2013. Overall, about a million people in South Sudan have been forced from their homes due to the conflict.

“It was always clear to us that our UN compounds were never designed to accommodate such huge numbers of people for such a length of time,” Ms. Johnson stated. “The conditions have been very difficult from the outset. The sites are alarmingly over-crowded and basic services not more than rudimentary.

“With the rainy season now settling in, conditions are getting worse,” she said, warning that the sites in Tomping and Malakal, in particular, are at imminent risk of turning into “death traps.”

These areas are likely to get flooded during the upcoming rainy season, and have to be closed before there is an outbreak of deadly water-borne diseases, such as cholera and typhoid.

Following the violent rains that raged over Juba a couple of weeks ago, half of the latrines in the Tomping protection site collapsed and the drainage systems were severely damaged. “As the rains increase, we all may find ourselves with a health catastrophe on our hands,” said Ms. Johnson.

As such, the Mission has decided to close the Tomping protection site in May. Several hundred internally displaced persons from that site have already been relocated to a new site in the Jebel area adjacent to the UN House. Once the construction of the new site is complete, all of the displaced will be transferred there. “We are in a race against time to establish the alternative sites,” said Ms. Johnson.

The envoy stated that the best option, however, is for all displaced persons to be able to go back to their homes in safety and dignity. “This means that peace and security need to reign in South Sudan. UNMISS calls on all the parties to stop the fighting that has resulted in so much suffering, and continue negotiations in good faith towards a peaceful solution to the conflict.”

Also calling for a real cessation of hostilities was Toby Lanzer, the UN Humanitarian Coordinator in South Sudan and deputy head of UNMISS, who described the situation in the country as “extremely serious” and one of the greatest humanitarian challenges he has ever seen.

“It exceeds what I saw in Darfur,” said Mr. Lanzer, a seasoned UN relief official. “But it could get a lot worse and we need to prepare ourselves for that.”

As a result of the devastating consequences of the conflict, South Sudan is classified as an “L3” humanitarian emergency by the UN, the highest level accorded by the world body. The other two countries in this category are the Central African Republic and Syria.

Speaking to reporters in Geneva, where met with the donor community, Mr. Lanzer noted that there are 3.7 million people in South Sudan who are already at risk of severe malnutrition. “It is all about April and May,” he said, referring to the planting season that is so vital to ensure a harvest in October and November.

He underscored the need for a halt to the fighting so that people can feel safe enough to return to their fields and plant their crops, warning: “If we miss the planting season, there will be a catastrophic decline in food security.”

The UN and its partners need $232 million for the next 60 days so that they can provide enough assistance in four key parts of the country – Unity, Upper Nile, Jonglei and Lakes.

“My message to donors is: Don’t be shy, don’t wait. Every dollar that’s given today can enable us to help flood South Sudan with seeds, with tools, with fishing nets, to help enable people to look after themselves,” he stated. The funds will also enable agencies to pre-position relief ahead of the rainy season and to continue to help people in the second half of the year.

“I don’t the time has come yet where a comprehensive peace is on the cards today. We’re not there yet. The time isn’t ripe for that. The wounds are too fresh. However, there are things that could be put in place at the moment to take pressure off people to enable them to access their fields,” Mr. Lanzer stated.

“I think that a real cessation of hostilities which the parties to the conflict respect, and which enables people to plant and cultivate, that could be a very important first step in the right direction.” 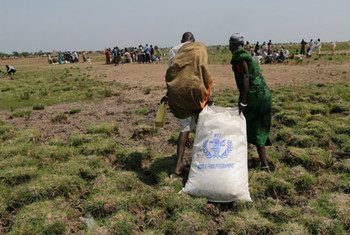