Encouraged by preparations for historic Afghan polls, Ban urges all citizens to vote

Encouraged by preparations for historic Afghan polls, Ban urges all citizens to vote

3 April 2014
Secretary-General Ban Ki-moon said today he is encouraged by the technical and security preparations and broad public engagement for Afghanistan’s upcoming elections and urged all of the country’s citizens to take part in the historic polls which will be held on Saturday.

The presidential and provincial council elections on 5 April will lead to the first transfer of power from one democratically elected leader to another in Afghanistan.

“These are extremely important elections for the country,” said a statement issued by the Secretary-General’s spokesperson.

Mr. Ban urged all Afghan men and women to participate in the vote and to take this opportunity “to have their say on the future direction of their country.”

“He reiterates that deliberate attacks against civilians are serious violations of international humanitarian law and that those responsible will be held accountable.”

Mr. Ban called on Afghan institutions to discharge their responsibility to deliver “credible, inclusive and transparent elections.” He also urged the candidates and their supporters to show patience and respect for electoral institutions and processes, while the ballots are counted and complaints adjudicated, and to abide by the results of the polls.

The Secretary-General’s Special Representative for Afghanistan, Ján Kubiš, said today that while the polls will not be perfect, they are another important step in strengthening the country’s representative institutions and building its democratic tradition.

“Security will be a key challenge,” acknowledged Mr. Kubiš. “There are spoilers and extremists, including the Taliban, who threaten to disrupt, or even target, what is a civilian process.”

He noted that Afghan authorities are taking a proactive approach to protecting the electoral process and civilians who seek to participate as voters, election workers, candidates, and national and international observers. This includes an emphasis on securing women’s right of participation.

Fraud is another major risk for the polls. The UN Assistance Mission in Afghanistan (UNAMA), which is headed by Mr. Kubiš, has highlighted the importance of domestic observers, as well as candidate and party agents in the prevention of fraud. More than 10,000 domestic observers and 250,000 candidate and party agents have already received accreditation to monitor the elections.

“Extensive and robust coverage by Afghan observers and campaign agents at the 6,423 planned polling centres is crucial,” said Mr. Kubiš. “Their presence represents one of the most effective instruments to detect and deter malpractice and fraud.”

While there are several hundred international observers registered to monitor the elections, which are led and managed by Afghans, the polls will be observed primarily by domestic groups.

“International observers add an international perspective as well as expertise. But they cannot match the numbers, coverage and access of domestic observers, who are the guardians of the electoral process,” said the envoy.

“More importantly,” he continued, “the participation of domestic observers underscores that these are Afghan-owned elections with Afghans acting as the final arbiter of the result.” 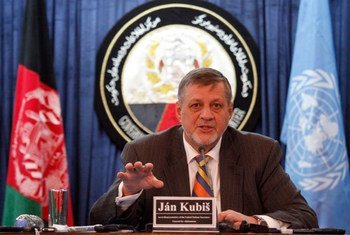 2 April 2014
A senior United Nations official today urged Afghans to use this Saturday’s presidential and provincial council elections to shape the future of the country through peaceful, democratic means.