At UN, countries to consider need for global instrument to protect marine biodiversity

United Nations Member States have begun a series of meetings in New York to discuss the need for an international instrument that would regulate the conservation and sustainable use of marine biodiversity beyond countries’ national jurisdiction.

From 1 to 4 April, a working group consisting of representatives from UN Member States, intergovernmental organizations, the scientific community and civil society are discussing ways to protect marine resources from a number of pressures that cumulatively put oceans at risk.

“If we are to fully benefit from the oceans, we must reverse the degradation of the marine environment due to pollution, overexploitation and acidification,” said Secretary-General Ban Ki-moon, who has in the past repeatedly urged all nations to work towards that end, including by joining and implementing the UN Convention on the Law of the Sea.

The Convention governs all aspects of ocean space, including the delimitation of maritime boundaries, exploitation of living and non-living resources, protection and preservation of the marine environment, marine scientific research and the settlement of relevant international disputes. If an instrument were to be developed, it would fall under this Convention.

At the 2012 UN Conference on Sustainable Development (Rio+20), States committed to urgently address the conservation and sustainable use of marine biodiversity beyond areas of national jurisdiction. Healthy, productive and resilient oceans, rich in marine biodiversity, have a significant role to play in sustainable development as they contribute to the health, food security and livelihoods of millions of people around the world.

“The Working Group is now at a critical juncture of its work. The next three meetings present a clear opportunity to try and overcome remaining differences and to crystalize the areas of convergence into concrete action,” said UN Legal Counsel Miguel de Serpa Soares in his opening remarks at the meeting.

The Working Group will present its recommendations on the scope, parameters and feasibility of the instrument to the General Assembly to enable it to make a decision before the end of its 69th session, in September 2015.

The meetings will be co-chaired by the Permanent Representative of Sri Lanka to the UN, Palitha T. B. Kohona, and the Legal Adviser of the Ministry of Foreign Affairs of the Netherlands, Liesbeth Lijnzaad. 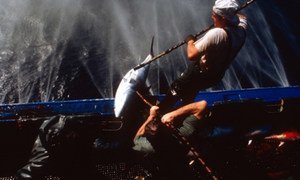