The United Nations confirmed today that Palestinian Authority officials have presented letters for accession to 15 international conventions and treaties.

UN spokesperson Farhan Haq told reporters that the documents had been presented to Robert Serry, the UN Special Coordinator for the Middle East Peace Process. “Once we receive the letters at Headquarters, we will be reviewing them to consider the appropriate next steps,” Mr. Haq said.

He added that the Palestinian leadership, including President Mahmoud Abbas upon signing the accession letters on Monday night, has repeatedly emphasized that it wants to continue the negotiations with Israel that resumed in July 2013 under United States auspices.

“We hope that a way can be found to see negotiations through until the scheduled end of the nine-month timeframe set to expire on 29 April. The goal remains to arrive at a substantive basis for negotiations towards a comprehensive peace agreement on all final status issues.”

Mr. Haq went on to say that the UN is in contact with the sides to emphasize the need to manage current developments responsibly and act with restraint.

In that regard, Mr. Serry met with the chief Palestinian negotiator, Saeb Erekat, and the Minister of Foreign Affairs, Riyad Malki, this morning. He also met with Israeli negotiator and Minister of Justice Tzipi Livni.

“A constructive approach from all sides is extremely important to preserve the prospects to arrive at a peace agreement and salvage the two-State solution,” said Mr. Haq, adding that envoys representing the diplomatic Quartet on the Middle East peace process have also spoken today by telephone.

The UN treaties and conventions, as well as the four Geneva Conventions and The Hague Convention (IV) respecting the Laws and Customs of War (accession letters were submitted to the Swiss and Dutch Representatives to the Palestinian Authority) can be found here.

At a press conference in New York, Palestinian Ambassador to the UN Riyad Mansour said that, at the request of his Government, he had delivered copies of the 15 letters to the Secretary-General’s Chef de Cabinet, Susana Malcorra. The Palestinian Authority expected the documents would be subsequently transmitted to the UN Office for Legal Affairs (OLA).

“Palestine is exercising its legal right as a State to join those instruments and live up to its international responsibility,” said Mr. Mansour, recalling the November 2012 General Assembly vote according Palestine the status of non-member observer State at the UN.

“We are proud of this and consider it a step by our President to consolidate and strengthen the pillars of the State of Palestine in the international system,” he added, referring to the applications.

Mr. Mansour went on to thank those assisting the Israeli-Palestinian political process, including US Secretary of State John Kerry. The Palestinian side, he said, will continue to participate in the process towards ending the occupations and realizing the aims of the two-state solution.

“We are ready to negotiate in good faith with Israel to put an end to this indignity,” he added.

Responding to questions regarding the impact of this decision on the peace process, particularly regarding the confidence-building measures agreed by both sides, Mr. Mansour said: “We do not believe what we have done violates anything.”

According to media reports, under the terms paving the way for the current round of talks between the two sides, Israel was to release some 100 Palestinian prisoners in four phases, and the Palestinians were to refrain from taking action in the international arena.

Mr. Mansour said that the Palestinian leadership had been ready and willing to keep this [latest] exercise on hold as long as Israel had lived up to its pledge to release the next group of Palestinian prisoners.

“But Israel did not honour its part of the agreement and when that happened, we were free to do whatever we feel we need to do. In any case, it was our right after the adoption of the [General] Assembly resolution,” he declared.

As to whether the submission of letters to join the international treaties could be considered a “provocation,” he said it was Israel that had violated the agreement with regards to prisoner releases. “We are not looking for a confrontation with anyone. We are exercising our right and we will not be apologetic about that. We are only responsible to the Palestinian people.” 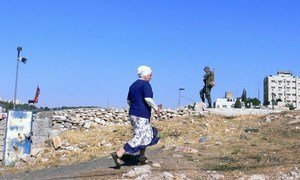 A senior United Nations official expressed deep concern today about the ongoing displacement of Palestinians in East Jerusalem and the destruction of their private property following the Israeli authorities’ recent demolition of a two-story building there, which affected a family of refugees as well as some Palestinian 15 children.