The number of suspected and confirmed cases of Ebola (EVD) in Guinea has jumped from 103 to 122 in just three days, with 80 confirmed deaths, said the United Nations World Health Organization (WHO), which will now focus on preventing further transmissions of the often fatal disease.

“The incubation period for all strains of Ebola is between two and 21 days,” said WHO spokesman Gregory Härtl, as he explained today at a press briefing in Geneva that the agency has taken “the maximum incubation period and multiplied it by two to get the length of time needed to ensure no onwards transmission.”

“Communication with local communities and their education is of crucial importance,” he stressed.

According to WHO, the source of infection has been localized in the south east of Guinea. In Liberia, the seven infected – four of whom have died – are Liberians who had recently travelled to Guinea and were subsequently contaminated. The previously suspected Sierra Leone cases have been tested negative.

The Ebola virus first appeared in 1976 in two simultaneous outbreaks in Sudan and Democratic Republic of the Congo (DRC) and it does not normally cause a large number of cases – the largest outbreaks were of approximately 400 cases. However, with no treatment and no cure, it has a very high fatality rate of up to 90 per cent.

Though smaller than past outbreaks in DRC and Uganda, the current Guinea Ebola cases fit the patterns of all previous outbreaks, said Mr. Härtl, explaining that the virus spread from the rural villages of the rainforest in the south east to the capital Conakry as the infected sought medical attention in the city.

Mr. Härtl stressed that in an outbreak the priority is stopping chain transmission and tracing all contacts. “The contacts need to be followed up for a period of 21 days and ensured against inadvertently spreading the disease to someone else,” he explained, adding that 11 health care workers have been confirmed as having contracted Ebola.

“WHO has been working both with Médecins sans Frontières and the Ministry of Health to ensure that the proper practices and equipment have been put in place to protect all these healthcare workers from the virus. Personal Protection Equipment has already been shipped, and more is on its way,” said Mr. Härtl.

He emphasized that, in public health terms, the current scope of the outbreak does not justify the use of the word “epidemic”. “The WHO is dealing with limited foci, limited geographical area and only a few chains of transmission,” he said.

For the time being, the UN health agency does not recommend any particular travel or trade restrictions. 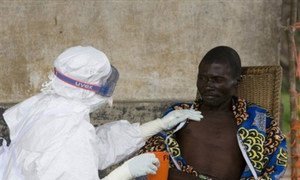 With a total of 103 suspected and confirmed cases of Ebola in Guinea, including 66 deaths, the outbreak must be watched very carefully, a spokesperson for the United Nations health agency said today, noting that there is no treatment or cure for the frequently fatal disease.