Feature: Drawing down – the end of UN Peace Operations in Sierra Leone

Feature: Drawing down – the end of UN Peace Operations in Sierra Leone

31 March 2014
Our two white UN vehicles are carefully moving down the dusty and bumpy road between Kenema and Koindu in the Eastern Province of Sierra Leone. We pass dozens of burnt, abandoned ruins of what were once sturdy brick and stone homes, some with hundreds of bullet holes in their walls – eerie remnants of Sierra Leone's brutal civil war that started in this very spot. About 1,200 of the former warlord Charles Taylor's rebels launched their devastating campaign here, leading to years of fighting that killed tens of thousands and displaced more than 2 million people (about a third of the population), disrupting nearly every national institution.

Our two white UN vehicles are carefully moving down the dusty and bumpy road between Kenema and Koindu in the Eastern Province of Sierra Leone. We pass dozens of burnt, abandoned ruins of what were once sturdy brick and stone homes, some with hundreds of bullet holes in their walls - eerie remnants of Sierra Leone's brutal civil war that started in this very spot. About 1,200 of the former warlord Charles Taylor's rebels launched their devastating campaign here, leading to years of fighting that killed tens of thousands and displaced more than 2 million people (about a third of the population), disrupting nearly every national institution.

After more than 15 years of successive peace operations, the last United Nations Mission in Sierra Leone, the UN Integrated Peacebuilding Office (UNIPSIL), is closing at the end of March. Among the challenges immediately ahead are support to the Government in the constitutional review process, as well as strengthening human rights, and justice institutions.

One of the key components of future UN engagement is reform of the security sector, focusing on cross-border security and transnational organized crime, that will be implemented following UNIPSIL’s drawdown. In the wind-down phase, a team of United Nations Development Programme (UNDP) security sector experts and UN Police is on its way to the border area to assess the challenges that remain and to examine how to support border security in the region.

Jesus Aguilar, Counter Narcotics and Organized Crime Advisor with UNIPSIL, has travelled many times to Sierra Leone's border. On this trip, he shares his insights with UNDP security experts Lawrence Bassie and Peter Cross: "Sierra Leone shares almost 1,000 kilometers of a frontier with Liberia and Guinea, including 896 crossing points - most of which are unmanned. A high volume of international smuggling, drug and human traffic, passes through here. To effectively stabilize the borders and control the large influx of drugs, UNDP's engagement and continued international support to national security institutions is in everyone's interest."

Aguilar is overseeing the activities of Sierra Leone's Transnational Organized Crime Unit (TOCU), the first of its kind in West Africa, in coordination with the United Nations Office on Drugs and Crime (UNODC). TOCU is mandated to combat organized crime through national and international coordination and to enable intelligence-based investigations of international crime. Since its establishment in 2010, this special crime unit has already carried out 18 law enforcement operations and investigated 337 drug or organized crime related cases, as well as supported the regional fight against illicit trafficking, drug trafficking and organized crime through joint border assessments and intelligence sharing with counterparts in Liberia and Guinea.

Wherever we pass, kids come waving and screaming towards our cars with the huge UN logos, adults casually give a thumbs up. The UN flag has been a symbol of hope for the population in this troubled region. Many of the over 17.000 blue helmets that arrived with the United Nations Mission in Sierra Leone UNAMSIL in Sierra Leone also helped to restore peace and bring back a sense of security in this district of Kailahun. "The UN brought all the warring factions together to one conference table, to build a better Sierra Leone," Koindu's Town Chief, Moses Foryoh, 64, remembers at our meeting with civil society representatives.

The UN's "blue helmets" disarmed more than 75,000 ex-fighters, including hundreds of child soldiers. The UN destroyed more than 42,000 weapons and 1.2 million rounds of ammunition – a potentially deadly arsenal. The UN assisted more than half a million Sierra Leonean refugees and internally displaced persons to return home and supported training for thousands of local police. With the UN’s help, Sierra Leone’s citizens voted in successive free and fair elections for the first time in their history.

Since its establishment six years ago as a civilian political mission, UNIPSIL helped Sierra Leone's citizens consolidate progress, addressing tensions that could have caused a relapse into conflict while strengthening institutions and promoting human rights. It helped the Government bolster the political process, emphasizing dialogue and tolerance, and further strengthened the national police. One such youth empowerment project arose from youths themselves: the Sierra Leone Bike Riders Union. At the Guinea border, we meet former child soldiers who are now earning a living by providing transport on their "Okada", a motorbike taxi, as part of this initiative.

During his recent visit to Sierra Leone, UN Secretary-General Ban Ki-moon praised the enormous strides towards peace, stability and long-term development in Sierra Leone and called it "one of the world's most successful cases of post-conflict recovery, peacekeeping and peacebuilding." He added that "this country shows that with a strong investment – in material resources, human energy, international support and national goodwill – we can achieve lasting peace."

Even in this most remote part of Sierra Leone, women are still selling fruit, vegetables and other basic commodities at small stalls in front of their houses; a clear sign that these communities don't suffer from food insecurity, as a World Food Programme colleague explains to me. Yet the fact that Sierra Leone remains one of the most underdeveloped parts of this world is visible wherever we pass: most of the roads are only passable with 4x4 vehicles, which are out of reach for most Sierra Leoneans. The signs of poverty induced environmental destruction are heartbreaking: acres and acres of beautiful lush vegetation are being burned down to provide charcoal for cooking.

We observe locals digging on the side of the road for gold and diamonds a few miles north of Kenema with simple equipment – a country that became infamous for its so-called “blood diamonds”, which reportedly fuelled much of the arms trade and kept the conflict going. Even though Sierra Leone is rich in natural resources including diamonds, titanium ore, bauxite, iron ore and gold, 76 percent of its population still lives below the poverty line. The World Health Organization reports that Sierra Leone has a life expectancy of 48 years, the lowest in the world. The country has the world’s highest under-5 mortality rate with 198 deaths of children under-5 for every 1,000 children born, according to UNICEF’s 2014 State of the World’s Children in Numbers report. It ranks only 177 out of 187 in UNDP's Human Development Index.

After an exhausting 14-hour long journey from the capital of Freetown we finally arrive at our first mission destination, the police station of Koindu. About 40 representatives from the national security service, armed forces, police as well as immigration and customs are squeezed into a small sparsely furnished meeting room to share their assessment of the security situation and needs of the community with us.

Nationwide, the UN has assisted in rebuilding national police and security forces and the results are tangible: Sierra Leone once hosted the largest UN peacekeeping operation in the world. Now, Sierra Leone has shifted from hosting more than 17,000 troops to being a troop-contributing country: more than 100 uniformed Sierra Leoneans serve under the UN flag in Darfur, Lebanon, Mali, South Sudan and Sudan - a powerful example of the country’s progress and the growing professionalism and institutional development of its security forces.

The Sierra Leoneans we meet have a simple wish list, which focuses on development issues: "What we urgently need are jobs for our youth, an ambulance, roads, electricity and clean water," Koindu's Town chief Foryoh claims. "There might be political conflict but no more war and destruction,"

With Sierra Leone at the crossroads of peacebuilding and long-term development, the international community is committed to building a more peaceful, democratic and prosperous country based on the rule of law and good governance. There are still challenges ahead as more needs to happen to strengthen civil society, promote political pluralism, empower women, create jobs – especially for young people – and improve education. Sierra Leone also has to invest in women and children’s health, reinforce democratic institutions, fight corruption, protect the environment, deliver on public services and establish sound State institutions.

But most of all, to avoid future conflict it will be important to ensure that all people in Sierra Leone, even in this remote border region, benefit from progress that is being made.

Kids at a school supported by the World Food Programme run towards our UN cars. UN Photo/Silke v. Brockhausen

Sierra Leone: UN hands over security in east to Government 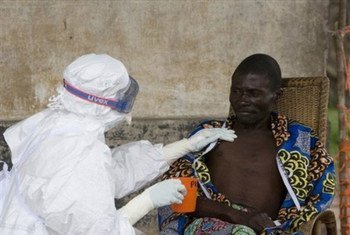 28 March 2014
With a total of 103 suspected and confirmed cases of Ebola in Guinea, including 66 deaths, the outbreak must be watched very carefully, a spokesperson for the United Nations health agency said today, noting that there is no treatment or cure for the frequently fatal disease. 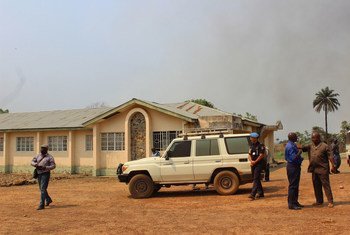 26 March 2014
“With some of the most perfect palm-lined sands on the continent, it won’t be long before Sierra Leone takes its place in Europe’s packaged beach-holiday scene.”