Icebergs in the Ilulissat icefjord visited by Secretary-General Ban in Greenland in March 2014 where he issued a warning about climate change. Photo UN/Mark Garten
31 March 2014

The effects of climate change are already occurring in all continents and across the oceans, and the world, for the most part, is ill-prepared for their risks, says a United Nations report issued today, which also warns that while action can be taken, managing the phenomenon’s impacts will be difficult on a rapidly warming planet.

The effects of climate change are already occurring in all continents and across the oceans, and the world, for the most part, is ill-prepared for their risks, says a United Nations report issued today, which also warns that while action can be taken, managing the phenomenon’s impacts will be difficult on a rapidly warming planet.

The report, Climate Change 2014: Impacts, Adaptation, and Vulnerability, from Working Group II of the Intergovernmental Panel on Climate Change (IPCC), details the impacts of climate change to date, the future risks from a changing climate, and the opportunities for effective action to reduce risks. The survey was released earlier today in Yokohama, Japan.

The report, the Nobel-Prize winning’s IPCC’s fifth such assessment, concludes that responding to climate change involves making choices about risks in a changing world. The nature of the risks of climate change is increasingly clear, though the phenomenon will also continue to produce surprises.

It identifies vulnerable people, industries, and ecosystems around the world and finds that risk from a changing climate comes from vulnerability (lack of preparedness) and exposure (people or assets in harm’s way) overlapping with hazards (triggering climate events or trends).

Welcoming the IPCC’s findings, UN Secretary-General Ban Ki-moon said the report confirms that the effects of human-caused climate change are already widespread and consequential, affecting agriculture, human health, ecosystems on land and in the oceans, water supplies, and some industries.

“To reduce these risks, substantial reduction in global greenhouse gas emissions must be made, along with smart strategies and actions to improve disaster preparedness and reduce exposure to events caused by climate change,” Mr. Ban said in a statement issued by his spokesperson in New York.

The UN chief urged all countries to act swiftly and boldly at every level, to bring ambitious announcements and actions to the climate summit he will convene on 23 September, and to make every effort needed to reach a global legal climate agreement by 2015.

During a press conference in Yokohama, IPCC Chairperson Rajendra K. Pachauri said: “In view of the impacts [presented in the report] and those that we have projected for the future, we know that nobody on the planet will be untouched by climate change.”

He cited shrinking glaciers, species migration, dwindling crop yields, rise in vector-borne diseases, and the increase in extreme events as clear evidence of the need for the international community to make better adaptation and mitigation choices, which is the only way to manage the risks of climate change.

“The world has to take this report seriously because there are implications for security of food supply, impacts of extreme events on morbidity and mortality, severe and irreversible impacts on species, and a risk of crossing various tipping points because of increasing temperatures,” said Mr. Pachauri, explaining that those impacts also affect human security, in that climate change could spark mass population displacement or increased conflict.

A total of 309 coordinating lead authors, lead authors and review editors, drawn from 70 countries, were selected to produce the report. They enlisted the help of 436 contributing authors, and a total of 1,729 expert and government reviewers.

“We live in an era of man-made climate change,” said Vicente Barros, Co-Chair of Working Group II. “In many cases, we are not prepared for the climate-related risks that we already face. Investments in better preparation can pay dividends both for the present and for the future.”

The report says, “People who are socially, economically, culturally, politically, institutionally, or otherwise marginalized are especially vulnerable to climate change and also to some adaptation and mitigation responses.”

Observed impacts of climate change have already affected agriculture, human health, ecosystems on land and in the oceans, water supplies, and some people’s livelihoods. The striking feature of observed impacts is that they are occurring from the tropics to the poles, from small islands to large continents, and from the wealthiest countries to the poorest.

“Adaptation can play a key role in decreasing these risks,” Mr. Barros noted. “Part of the reason adaptation is so important is that the world faces a host of risks from climate change already baked into the climate system, due to past emissions and existing infrastructure,” said Mr. Barros.

The IPCC is the international body for assessing the science related to climate change. It was set up in 1988 by the World Meteorological Organization (WMO) and the UN Environment Programme (UNEP) to provide policymakers with regular assessments of the scientific basis of climate change, its impacts and future risks, and options for adaptation and mitigation. 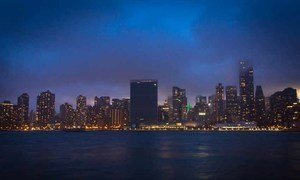 It will be “lights out” for the United Nations later this evening as the Organization shuts off the lights at its iconic Headquarters complex in New York and other facilities around the world in observance of “Earth Hour,” an annual global event raising awareness about the need to take action on climate change and promoting sustainable energy consumption.