UN Photo/ICJ-CIJ
A view of the judges of the International Court of Justice (ICJ) during the session at which the court delivered its judgment in Whaling Case: Australia v. Japan.

31 March 2014
The United Nations International Court of Justice (ICJ) has ruled against Japan in a case involving charges by Australia that the country was using a scientific research programme to mask a commercial whaling venture in the Antarctic.

The Hague-based UN judicial arm ordered a temporary halt to the activities, largely involving fin, humpback and minke whales, finding that the Japanese Whaling Research Programme under Special Permit in the Antarctic (JARPA II) is “not in accordance with three provisions of the Schedule to the International Convention for the Regulation of Whaling (ICRW).”

In May 2010, Australia instituted proceedings alleging that Japan was pursuing a large-scale programme of whaling under JARPA II, and was in breach of its ICRW obligations, as well as its other international obligations for the preservation of marine mammals and the marine environment.

In its application, Australia requested that the ICJ order Japan to “end the research programme, revoke any authorizations, permits or licences allowing the programme’s activities; and provide assurances and guarantees that it will not take any further action under the JARPA II or ‘any similar programme until such programme has been brought into conformity with its obligations under international law.”

Though Japan rejected the charges and countered that its scientific research programme was in line with treaty obligations, 12 of the 16 World Court Judges found that the country was in violation of three ICRW Schedule provisions and, following Australia’s request, ordered that the country “revoke any extant authorization, permit or license to kill, take or treat whales in relation to JARPA II, and refrain from granting any further permits” for that programme.

The Court noted that there are three additional aspects of JARPA II which “cast further doubt” on its characterization as a scientific research programme: the open-ended time frame of the programme; its limited scientific output to date; and the lack of cooperation between JARPA II and other domestic and international research programmes in the Antarctic Ocean.

“Even if a whaling programme involves scientific research, the killing, taking and treating of whales pursuant to such a programme does not fall within Article VIII unless these activities are ‘for purposes of’ scientific research,” explained the ICJ in a press release today, adding that it found no evidence of such purpose in JARPA II.

Judgments handed down by the ICJ are final and binding on the parties. 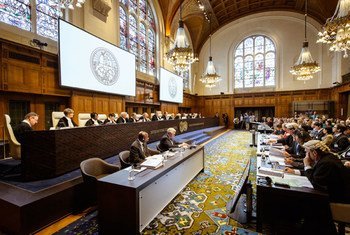 27 June 2013
The United Nations’ highest court has opened hearings in a case concerning charges by Australia that Japan is using a scientific research programme to mask a commercial whaling venture.