WFP/George Fominyen
Across South Sudan, WFP and its partners have reached around half a million people displaced or otherwise directly affected by conflict since the crisis erupted in December 2013.

The two-day visit by Ertharin Cousin, Executive Director of the World Food Programme, and António Guterres, the UN High Commissioner for Refugees, comes amid the “alarming” spread of hunger and displacement in the wake of the conflict that flared up in mid-December, according to a joint news release issued by WFP and UNHCR.

The fighting between Government and opposition forces has displaced more than 800,000 people inside the country, including 68,000 who are sheltering in UN peacekeeping bases. A further 254,000 refugees have crossed into neighbouring countries seeking shelter and food. South Sudan, which gained its independence from Sudan in July 2011, is also host to some 220,000 refugees from Sudan in camps close to conflict areas.

Ms. Cousin and Mr. Guterres will meet displaced people, partners and local authorities in South Sudan, before crossing over the border to meet some of the more than 80,000 refugees in Ethiopia.

“It is heartbreaking to see that some of the very people who had fled the war two decades ago, people we helped to return to South Sudan after independence, are having to flee for their lives again, many back to the very same places where they lived in exile,” said Mr. Guterres, noting 40,000 people have crossed into Sudan to escape recent fighting.

The two officials are concerned about the number of people cut off from any form of aid, especially with humanitarian access becoming more challenging owing to ongoing fighting, which has also put a halt to farming in some areas.

“Large-scale population displacement and disruption of markets and trade routes are creating a food security crisis,” said Ms. Cousin. “People are in acute need. Humanitarians require two things: safe access to those in need and the funds to bring in lifesaving supplies – food, shelter, vaccines, healthcare and other aid. Several countries have contributed generously, but at current levels we are only able to cover a fraction of the needs.”

In the more than 100 days since the start of the conflict more than half a million people have received food assistance inside the country, but continued conflict, combined with the onset of the rainy season has made it difficult to reach many people in need. The relief effort has been further hampered by a severe lack of funds.

Also today, the UN Food and Agriculture Organization (FAO) announced that it will be able to help conflict-affected families in South Sudan restore their farming livelihoods and stave off an increasingly alarming food security situation thanks to new support from the United Kingdom.

“Some seven million people are facing the risk of hunger, including nearly one million people who have fled their homes as a result of the fighting and the fear it generates,” Sue Lautze, who heads FAO’s team in South Sudan, said in a news release. “It’s not only people who are being displaced. Over ten million head of livestock have been taken away from their usual grazing routes.”

The $13.7 million in emergency funding provided by the UK’s Department for International Development (DFID) will enable FAO to provide households in time so that they can get seeds in the ground during the current planting season.

“We are working under intense deadlines,” said Ms. Lautze. “We have an extremely tight window in which to deliver seeds and other vitally-needed inputs to farmers. It’s already starting to rain in some areas. Once the rain comes, it is too late to plant and vast areas become inaccessible.”

The agency’s support is built around a two-pronged approach that helps vulnerable households in conflict-affected areas begin to rebuild their shattered livelihoods, while also providing support to farmers in non-conflict-affected areas. FAO can work with those farmers to increase the supply of food in the coming months, to help mitigate the impact of the looming food crisis.

“We have an important window of opportunity to help millions of people in South Sudan, but we have no time to lose in this increasingly alarming situation,” Ms. Lautze said. 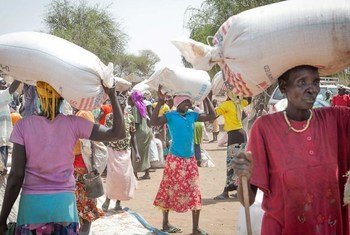