The United Nations Emergency Relief Coordinator warned the Security Council today that as the Syrian civil war grinds on and millions of desperate people remain cut off from aid, “the humanitarian situation remains bleak, and will continue to be bleak, unless we are granted full and unhindered access, through the most efficient and direct means.”

“I told the Council that we need to see a significant step-change in the speed and scale of humanitarian aid, if we are to save lives and keep pace with the ever-growing needs,” said Valerie Amos, speaking to the press after briefing Council members on Secretary-General Ban Ki-moon’s latest report on implementation of the key elements of resolution 2139 (2014), which focused on humanitarian access to besieged and hard-to-reach areas, including across conflict lines and across borders, and the expansion of humanitarian relief operations.

Ms. Amos, who is also the Under-Secretary-General for Humanitarian Affairs, said while the Council’s resolution had demanded an end to the fighting and enhanced access for aid and relief workers, the situation for desperate civilians had not changed and the violence had only intensified in the four weeks since the text’s adoption, with many people killed and injured.

Moreover, since 22 February, some 300 cases of sexual violence have been recorded in Damascus and Rural Damascus alone. “I am also very concerned that hundreds of thousands of people have been newly displaced from areas like eastern Aleppo and Yabroud in the south – driving them further from the reach of humanitarian assistance,” she added.

Her words echoed the grim picture the Secretary-General painted in his report of the situation on the ground, characterized by indiscriminate and disproportionate attacks, including aerial bombings, shelling, mortars and car bombs in populated areas, causing mass civilian death and injuries and forced displacement. He adds that reported daily death tolls over the past month were on average in excess of 200 people, including civilians.

The report also says heavy fighting was particularly intense in Aleppo, Dar‘a and Rural Damascus governorates. At least 500,000 people have been displaced from the eastern part of the city of Aleppo since late January. Approximately 100,000 internally displaced persons (IDPs) are sheltering in camps close to the Turkish border, while some 22,300 people fled to Turkey during the reporting period. In Dar‘a, “fierce fighting between Government forces and armed opposition groups escalated, leaving around 159,000 people displaced as at the end of February,” says the report.

The Secretary-General goes on to note that as the conflict intensifies and fighting between armed groups increases, more people are slipping out of the reach of humanitarian organizations. Around 3.5 million people are now estimated to be in need of assistance in hard-to-reach areas, an increase of 1 million since the beginning of 2014.

“One month since the adoption of [the resolution]…humanitarian access in [Syria] remains extremely challenging for humanitarian organizations. Delivering life-saving items, in particular medicines, remains difficult. The assistance reaching people continues to fall far short of what is required to cover even their basic needs.”

In this context, the Secretary-General strongly urges the Syrian Government to streamline and speed up convoy procedures, ensure the safe passage of humanitarian convoys at all Government-controlled checkpoints and ensure that security focal points comply with approvals given at the Damascus level; facilitate the passage of medicines, including surgical supplies, and desist from the removal of medical supplies from convoys; and continue to speed up the approval of visas.

He urged opposition forces to facilitate safe and unhindered humanitarian access and grant safe passage to convoys; strengthen control and command structures to enable the safe passage of convoys at checkpoints that they control; and ensure the safety and security of humanitarian staff.

For her part, Ms. Amos said the UN and its humanitarian partners have been able to provide some assistance through cross-line convoys including to areas where people had not had aid for months. “But in many situations the lack of security or those controlling checkpoints continue to prevent vital and basic aid from reaching people.”

The first UN cross-border convoy for affected communities in al-Hassakeh entered Syria via the Nusaybin/Qamishly crossing point in the last week. The trucks carried food for 50,000 people, medicines for 60,000 and household items like blankets and clothing for over 60,000.

However, the humanitarian situation remains bleak, and would continue to be bleak, unless full, unhindered and direct access was granted. “Only six per cent of the people living in besieged areas have received assistance in the past month,” she said.

The current piecemeal approach “despite the best efforts of humanitarian workers on the ground, is not delivering change fast enough.”

The Council’s resolution was very clear on these points, she said, adding that the rules of international humanitarian law are also clear. “The continued withholding of consent to cross -border or cross-line relief operations, particularly of commodities privileged throughout the Geneva Conventions – like food, water, medical treatment and supplies, or shelter – is arbitrary and unjustified.”

Repeating her call on Council members to use their influence with the conflict parties to facilitate access for aid, to protect civilians and to lift the sieges, Ms. Amos said that above all, their continued political efforts to help the parties find a way out of this crisis and bring hope to Syrian families are essential.

“As the situation gets worse, not better, it is the ordinary men, women and children of Syria who continue to bear the brunt of this conflict, regardless of who they are, where they are from, or their religious beliefs,” she said. 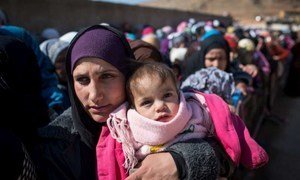