FAO/IFAD/WFP/Petterik Wiggers
Building long-term resilience is one of the priorities under the Africa Solidarity Trust Fund.
28 March 2014

A unique, Africa-led United Nations-backed fund designed to improve food security across the continent has become a reality for the first six countries slated to benefit from the initiative.

The Central African Republic, Ethiopia, Malawi, Mali, the Niger and South Sudan today signed agreements in Tunis, Tunisia, with the UN Food and Agriculture Organization (FAO), to receive $2 million each from the Africa Solidarity Trust Fund.

"The Africa Solidarity Trust Fund shows that African countries are ready to step up and work with their neighbours to build a sustainable and food secure region, and to have the future we want," said FAO Director-General José Graziano da Silva, who encouraged other African Governments to join the effort and contribute to the Fund.

The agreements were signed during the FAO Regional Conference for Africa in the Tunisian capital, which opened Monday 24 March and concluded today with a reaffirmation of its commitment to food security and sustainable development.

A final report adopted by the Conference recognized the importance of enhancing the business opportunities that agriculture offers to African youth as a pathway to social inclusion, food security and sustainable development.

The contributions to the Africa Solidarity Trust Fund will be used to bolster a wide range of projects to improve food security, nutrition, agriculture and rural development.

The trust fund, which is housed at FAO, was originally proposed in 2012 by President Denis Sassou Nguesso of the Republic of the Congo, and launched last year with a funding package of $30 million from Equatorial Guinea.

Additional funding from Angola ($10 million) and a group of civil society organizations in the Republic of the Congo have brought the total amount to $40 million. Cameroon has also pledged to add to the fund and other countries are expected to join in the coming months. 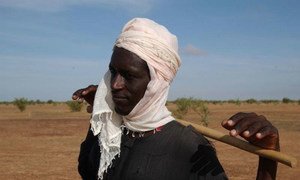 Getting more African youths involved in agriculture and investing in the continent’s vulnerable small family farmers will be pivotal to improving nutritional and economic well-being in the years to come, a sensor United Nations official said today, citing water scarcity and conflict as some of the biggest challenges to achieve food security in the region by 2025.