28 March 2014
The United Nations peacekeeping chief today expressed his solidarity with the Afghan people on the eve of next week’s elections and reaffirmed the world body’s support for the country through the polls and beyond.

“The upcoming elections are a crucial part of Afghanistan’s political transition. I am here to underscore the UN’s commitment to transparent elections and to show solidarity with all those Afghans determined to take part and make them work,” Under-Secretary-General for Peacekeeping Operations Hervé Ladsous said in the capital, Kabul, as he wrapped up a three-day visit.

Following Tuesday’s deadly suicide attack and armed assault against an office of the country’s Independent Election Commission (IEC), Mr. Ladsous met with key officials of the agency that has a lead role in organizing the 5 April presidential and provincial council elections.

“I want to send out a clear message of solidarity with the people of Afghanistan,” said Mr. Ladsous. “The targeting of IEC premises and its staff by enemies of democracy is repugnant.”

“As the UN Assistance Mission in Afghanistan (UNAMA) has consistently pointed out,” he continued, “such attacks on civilians are serious violations of international humanitarian law and may amount to war crimes.”

Mr. Ladsous underlined that violence will not deter the UN’s resolve to support Afghanistan, saying, “The UN has had a presence in Afghanistan for more than six decades, often during some extremely difficult times – this commitment will not change in the weeks, months or years to come.”

He also spoke of his hope that every Afghan citizen will take up his or her right to vote in the upcoming polls and have their say in shaping the country’s future. Further, he noted the improvements in the electoral preparations compared to earlier elections, as well as the measures taken in difficult circumstances by national bodies to improve the security environment so that voters can cast their ballots in safety.

Mr. Ladsous highlighted the measures put in place by the IEC and other Afghan electoral authorities to detect fraud, and how the presence of observers and candidate agents at polling centres will help safeguard the transparency of the elections.

“Everything that can be done to counter fraud – not just by the authorities but by Afghan citizens themselves as well – must be done,” Mr. Ladsous said. “Widespread fraud would affect the acceptability of the final results from the polls and would impact upon the international community's future aid commitments to Afghanistan. We are entering a new phase for Afghanistan and transparent elections are essential.”

Mr. Ladsous made particular reference to women in the upcoming elections, noting the important role they will play – as candidates, election workers and voters.

“As with all facets of life, women have a key role to play in these elections – without them, the vote cannot be truly representative and credible,” he said.

The Under-Secretary-General’s visit, during which he met with electoral, government and security officials, as well as representatives of civil society and the international community, comes at a crucial time for Afghanistan.

Next week’s elections will lead to the country’s first democratic transfer of power, and this year will also see the withdrawal of the majority of allied international military forces, with national forces assuming full responsibility for security countrywide. 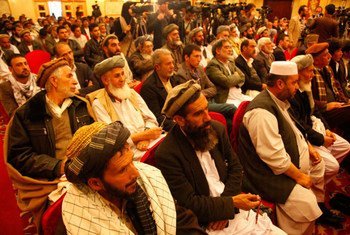 25 March 2014
The United Nations has condemned today’s deadly attack on an office of the Afghan Independent Election Commission (IEC) in Kabul which comes less than two weeks before the holding of presidential and provincial council polls.