The crisis in Iraq’s Anbar province, where three months of fighting has displaced over 66,000 families, poses the most serious challenge to the Government’s efforts to maintain the stability and security needed to build a democratic State, a United Nations envoy told the Security Council today.

Nickolay Mladenov, the Secretary-General’s Special Representative and head of the UN Assistance Mission for Iraq (UNAMI), said in his briefing to the 15-member body that since the crisis began in late December, the Council of Representatives has witnessed boycotts by three of its largest blocs.

This has resulted in the inability of the Council of Representatives – Iraq’s legislature – to secure a quorum for the majority of its sessions. It has also brought the entire legislative process to a halt during this critical time ahead of national elections scheduled for 30 April, he noted.

It is from Anbar, which has suffered months of attacks by the attacks being carried out by Al-Qaida-linked militants, that “the most serious threat to the security of the country stems,” said Mr. Mladenov, a Bulgarian national who was appointed to head UNAMI last August. It is also beginning to affect other parts of the country.

“The country’s security is strained by well-armed and well-trained terrorist groups with access to substantial financial resources. Their goal is clear – establish a permanent foothold beyond the control of the authorities and consolidate a base for the expansion of their operations. They exploit divisions and weaknesses in Iraqi society and want to ultimately make the country ungovernable.”

The UN is also closely following all attempts to broker a peaceful solution to the Anbar crisis, said the envoy, who has engaged in intensive meetings with leaders from across the spectrum of Iraqi politics.

“In all meetings I have stressed that while the United Nations will support Iraq's fight against terrorism, the challenges facing the people of Iraq cannot be resolved without dialogue, and concessions,” he stated.

“While a security response is necessary to tackle the threat of armed groups and terrorists, a range of strategies are needed to successfully address the conditions that enable terrorist activity,” Mr. Mladenov stated. “The protection and advancement of human rights, equality before the law and the inclusion of those who feel marginalised will become central in any political resolution in the future.”

He reported that amidst the crisis, the UN’s primary concern has been to provide life-saving assistance to those displaced by the fighting – over 66,000 families, many of whom remain trapped in areas of active conflict.

“The intensity and nature of the fighting is significantly constraining regular access by the UN and other humanitarian actors to those affected,” the envoy said. “Despite these difficult circumstances, the UN is delivering assistance where it can and has recently accessed areas that were previously unreachable.”

At the same time, Mr. Mladenov stressed that without securing additional funding, the UN will very soon be unable to continue its humanitarian assistance to those fleeing the fighting in Anbar.

As for the upcoming polls, which will be Iraq’s third national election under the 2005 Constitution, he said that it is likely to be the country’s most contested race to date. On the same day, voters in the Kurdistan Region will also choose their governorate council representatives.

“We are confident that from a technical perspective the two elections can take place on time,” he stated, noting that technical preparations are on track, including the distribution so far of 75 per cent of the new electronic voter registration cards, and that security arrangements are also expected to be in place.

Mr. Mladenov, who was presenting the Secretary-General’s latest report on the activities of UNAMI and the most recent developments in the country, also reiterated that Iraq’s future cannot be considered in isolation from the broader challenges that the region is facing.

“As divisions continue to plague Iraqi politics, the ongoing conflict in Syria has added a regional dimension to sectarian tensions and is affording terrorist networks the occasion to forge links across the border and extend their support base.

“The situation is further compounded by unresolved constitutional issues that constantly bring to the fore the existing tensions between Iraq’s communities. All this makes for a fragile and explosive combination.”

Established in 2003, UNAMI is mandated to advise and assist the Government and people of Iraq on a number of fronts including advancing political dialogue and national reconciliation, assisting in the electoral process, facilitating regional dialogue between Iraq and its neighbours, and promoting the protection of human rights and judicial and legal reform. 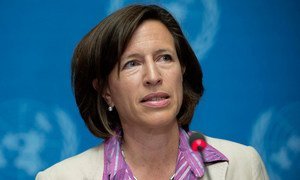 The United Nations said today that it is receiving more reports of civilian casualties and further displacement within Iraq as the conflict in Anbar province continues.