IRIN/Alexis Adele
Supporters of former Ivoirian president Laurent Gbagbo at a rally in February 2014 in Koumassi town, south of Abidjan. There are worries over Côte d’Ivoire’s 2015 poll preparations.
27 March 2014

“The 2015 presidential election has to be the ultimate test and proof that Côte d’Ivoire has recovered from this crisis,” stated Special Rapporteur Doudou Diène as he presented his latest report to the Human Rights Council.

Drawing attention to some key lingering problems that need to be resolved so that the upcoming presidential election can be “credible and consensual,” Mr. Diène cited an “impartiality and equity of justice” and a “fully participating democratic process” as the main priorities.

The human rights expert warned that – for the time being – among the people charged with committing crimes, only partisans of former president Laurent Gbagbo are being tried or imprisoned. “All that have committed violent crimes whatever their political, ethnic or tribal or religious background should be tried,” Mr. Diène underscored.

With former President Gbagbo currently facing trial at The Hague-based International Criminal Court (ICC), the Special Rapporteur further called for the trial of the country’s former first lady, Simone Gbagbo, to be expedited.

He also urged for an overhaul of the country’s independent electoral commission ahead of the 2015 elections. “Everybody agrees that it has to be reformed because it does not reflect the reality of the political landscape of Côte d’Ivoire,” Mr. Diène noted.

“Côte d’Ivoire is on the way of recovering from 10 years of violent crisis, but it is just a process because the crisis has been very deep,” the human rights expert said. “It will take time for Côte d’Ivoire to totally recover but I feel the grounds have been rebuilt and the basis is there for recovery.” 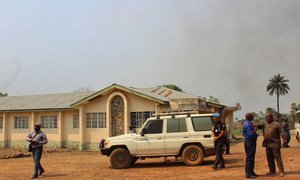 “With some of the most perfect palm-lined sands on the continent, it won’t be long before Sierra Leone takes its place in Europe’s packaged beach-holiday scene.”