Getting more African youths involved in agriculture and investing in the continent’s vulnerable small family farmers will be pivotal to improving nutritional and economic well-being in the years to come, a sensor United Nations official said today, citing water scarcity and conflict as some of the biggest challenges to achieve food security in the region by 2025.

“The region’s economic growth rate is above the global average and most of the world’s fastest-growing economies are in Africa,” noted José Graziano da Silva Director-General of the UN Food and Agricultural Organization (FAO) today during the agency’s 28th Regional Conference for Africa, in Tunis.

"The challenge is to translate this growth into social inclusion. Agriculture, rural development and youth can make this happen,” he told the gathering of African ministers of agriculture.

In a news release, FAO stressed that with Africa being the world's youngest continent – half of its population is under 25 – the rejuvenation of the agricultural sector is high on the conference’s agenda.

"Every year, 11 million people enter [Africa’s] labour market. But salaries are low in the rural sector, informality is high, agriculture is not considered as attractive by many of the region's youth, and social protection is not always available for rural families in critical situations,” explained Mr. da Silva.

FAO notes that though some African countries have shown impressive growth in the past decade, this has not translated into widespread employment or income for young people. The agency is calling for greater public and private investment in agribusiness, agro-industry and market-related services to attract and retain young workers, fuel job creation, and spur new development in the agricultural sector.

Drawing attention to the fact that the African Year of Agriculture and Food Security was being observed alongside the International Year of Family Farming, Mr. da Silva called on African countries to "use this opportunity to put small farmers, fishers, pastoralists, forest collectors and traditional and indigenous communities at the centre of our agenda.”

Emphasizing that some 90 per cent of rural African households are engaged in farming-related activities, he said in his address that "to achieve food security we need to combine the sustainable increase of production and social protection to provide a cushion for the most vulnerable.”

Mr. da Silva also applauded the establishment of the FAO-housed Africa Solidarity Trust Fund, which is backed by the African Union, fully financed by African countries, and was developed in line with the Comprehensive Africa Agriculture Development Programme (CAADP).

Later in the week, the Director-General is expected to sign agreements releasing the first packages of funding to six countries – Central African Republic, Ethiopia, Malawi, Mali, Niger and South Sudan – for programmes and action plans supported under the Trust Fund. FAO has also supported countries in developing proposals for other sources of funding, including the Global Agriculture and Food Security Program (GAFSP), which has provided 15 African countries with a combined total of more than $560 million.

To further this progress, FAO has implemented three regional initiatives, each responding to priorities identified by Member States: support to the renewed efforts to end hunger by 2025, promotion of a sustainable intensification of agricultural production and commercialization, and resilience-building in the drylands of Africa with a special focus in the Sahel, Horn of Africa and flood-prone countries. 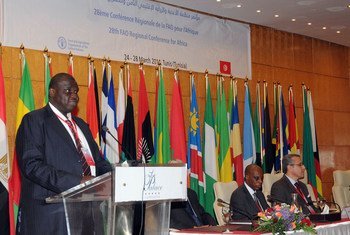 24 March 2014
The United Nations Food and Agriculture Organization (FAO) warns today that despite notable recent economic progress, Africa remains the world’s most food insecure continent and calls on all African agriculture ministers to focus their investments and support efforts on smallholder farmers, including youth and women.