Peng Liyuan, an internationally renowned musician and First Lady of China, has been named by the United Nations Educational, Scientific and Cultural Organization (UNESCO) as a Special Envoy for the Advancement of Girls’ and Women’s Education.

“The education of girls and women is a basic right, and the best possible investment for human development. To succeed, we need role models, and you are an immense role model for millions of young girls in China and beyond,” UNESCO Director-General Irina Bokova said, addressing Peng Liyuan at a ceremony at the agency’s Paris headquarters.

“I encourage you to make the message of girls’ and women’s education heard. I am convinced you can make a difference, and that you can play a leading role in this struggle that is of prime importance to the whole world,” Ms. Bokova added.

Peng Liyuan is named in recognition of “her commitment to empowering girls and women through quality education, her outstanding contribution to fighting inequalities in education, her devoted service to human development and creativity, and her dedication to the ideals and aims of the organization,” UNESCO stated in a news release.

“Right now, I am thinking of my father, who was the principal of a night school in a rural area, and with him, the mothers who began writing their first words and then teaching them to their children. In doing so, they were making basic education a possibility,” said Peng Liyuan.

“A child’s first teacher is its mother,” added the First Lady. “Making sure that mothers are educated means we can lift more people out of poverty and build a more inclusive and sustainable society.”

She is also professor and PhD supervisor at the China Conservatory. Actively involved in public undertakings, she currently serves as the Voluntary Advocate for AIDS and tuberculosis control and prevention for the Chinese National Health and Family Planning Commission.

Also today, President Xi Jinping became the first ever Chinese head of State to visit UNESCO. Ms. Bokova described the visit by Mr. Xi and the First Lady as “historic” and highlighted the many activities jointly conducted by UNESCO and China, which bear witness to “China’s clear vision to invest in ‘soft power’ – in education, the sciences and culture – to write a new chapter of its economic and social development.”

♦ Receive daily updates directly in your inbox - Subscribe here to a topic.
♦ Download the UN News app for your iOS or Android devices.
girls|education

In 19 Arab countries, majority of 8 million children not in school are girls - UN 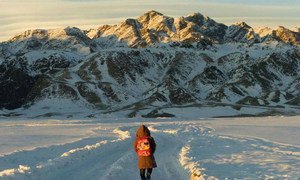 The head of the United Nations Educational, Scientific and Cultural Organization (UNESCO) today called on Governments, the private sector and civil society to scale up efforts to provide quality education for girls, stressing the transformative benefits this has for all of society.