Syrian refugees arrive in Lebanon earlier this year after fleeing their homes in western Syria. The number of Syrian refugees has passed 2.563 million. UNHCR/A.McConnell

25 March 2014
The international community has a duty to help end Syria’s tragic civil war, United Nations Secretary-General Ban Ki-moon emphasized today at a meeting of Arab leaders in Kuwait, where he stressed that there is no military resolution to the conflict, which “can only be resolved through a political solution.”

Mr. Ban, in a wide-ranging speech delivered by Lakhdar Brahimi, Joint Special representative of the UN and the League of Arab States to the 25th Ordinary session of the League, thanked those countries hosting more than 2.5 million refugees for bearing the heavy cost of the deteriorating humanitarian situation.

The Secretary-General spelled out, “in Syria, the crisis is now in its fourth year. Syrians continue to endure appalling suffering, including gross violations of human rights. Hundreds of people are dying every day. Millions have been displaced.”

Noting that the conflict has been “acutely felt” by neighbouring countries, Mr. Ban warned that the entire region was in danger of becoming embroiled and appealed to Arab League members – working with Russia, the United States and the UN – to re-energize “Geneva II”, as the most recent discussions between the Syrian Government and main opposition group are known.

Two rounds of talks earlier this year, the first in January followed by a second round in February, saw both sides sticking to their positions and yielded only modest cooperation on a humanitarian issue related to aid access in the long-besieged Old City of Homs.

The basis of the talks is full implementation of an action plan adopted in the so-called Geneva Communiqué of 2012, the first international conference on the conflict, which calls for a transitional government to lead to free and fair elections.

“It is particularly essential that the regional actors are unified in encouraging all parties to return to the negotiating table,” Mr. Ban said.

Highlighting Lebanon’s vulnerability, Mr. Ban welcomed the “unity of the international community” in supporting Lebanon’s security and stability – including the role of the League of Arab States and the International Support Group for Lebanon.”

Mr. Ban highlighted Palestinian-Israeli relations as another main issue of concern, urging both sides to “make the necessary compromises” to achieve lasting and comprehensive peace.

He noted that “Israeli settlement activities were a violation of international law, and pose a serious threat to a peaceful resolution of the conflict” and said the two-State solution must be salvaged by creating conditions for meaningful negotiations to resolve the core issues of conflict.

Mr. Ban said Tunisia was “a clear example of the power of consensus-building, commitment to dialogue and willingness to reach compromises to advance the national interest,” lauding its Constitution of 26 January as “a major milestone for the country's transition.”

While acknowledging that Yemen still faces political, security and humanitarian challenges, he pointed to its National Dialogue Conference of 25 January to illustrate that genuine dialogue and compromise were the best ways to attain positive change.

“The agreed vision to build a new federal and democratic Yemen is a hard-won achievement,” he said, promising “the United Nations will remain fully engaged with its partners to assist the people of Yemen to build a more secure, just and prosperous future for all.”

Speaking to recent developments in Libya, Mr. Ban underscored the urgent need for Tripoli to firmly obligate itself to the democratic process and committed the United Nations to assist the Libyan authorities “to rebuild their State following more than four decades of authoritarian rule.”

“Durable democratic peace is critical for the people of Egypt and all of North Africa and the Middle East,” he asserted.

Looking to Sub-Saharan Africa, the Secretary-General pointed out that Darfur also remains highly unstable – punctuating that recent fighting has displaced nearly 100,000 people from their homes.

“It is essential that implementation of the Doha Document for Peace in Darfur is accelerated and that we intensify efforts to encourage the Government of Sudan to address the root causes of conflict and end it,” Mr. Ban maintained.

The Secretary-General expressed his satisfaction of the collaboration between the UN and the Arab League in promoting development and peaceful conflict resolutions.

“I count on your support in strengthening this cooperation, in particular in the areas of mediation and electoral support,” he concluded. 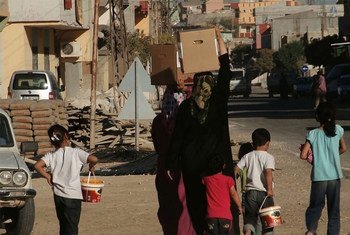 20 March 2014
A United Nations convoy carrying vital humanitarian supplies for hundreds of thousands of people in desperate need in northern Syria is leaving today from Turkey, the first time in the three years of the conflict that aid is being transported via this route.