25 March 2014
With the humanitarian situation in Sudan deteriorating and neighbouring South Sudan “imploding,” United Nations relief officials today appealed to donors to urgently fund life-saving activities in the two countries, both of which are in desperate need of assistance.

John Ging, Operations Director of the UN Office for the Coordination of Humanitarian Affairs (OCHA), cited an urgent need to mobilize funding for the crisis in Sudan, where some 6.1 million people currently need assistance – a 40 per cent increase over this time last year.

Malnutrition and food insecurity are escalating at an “alarming” rate, with some 500,000 children affected, he told a news conference in New York.

The situation is particularly dire in Darfur, where renewed violence is displacing larger and larger numbers of civilians – almost 400,000 newly displaced in 2013, and almost 200,000 more so far this year.

“This dire humanitarian situation is compounded by the fact that, with so many crises around the world currently, Darfur not getting the attention or global funding that it deserves,” said Mr. Ging, who recently visited both Sudan and South Sudan on an inter-agency mission with other humanitarian colleagues.

He added that the situation in Sudan requires an end to conflict and a more generous response from the international community. So far this year, the UN and partners have only received 3 per cent of the $995 million requested for humanitarian activities in Sudan.

Mr. Ging described as “very tragic” what has happened in neighbouring South Sudan, where fighting between Government and opposition forces that began in mid-December has left nearly 5 million people in need of humanitarian assistance, including 3.7 million at high risk of food insecurity.

“You have the newest country in the world now imploding,” he stated, noting that the conflict is setting back the very fragile development that was occurring since the country gained independence from Sudan in July 2011.

Amid the “senseless” brutality, some 700,000 people have been displaced internally, including 67,000 who are sheltering at UN bases around the country, while almost a quarter of a million people have sought refuge in neighbouring countries.

One of the major challenges in South Sudan, Mr. Ging said, is the lack of respect on the ground for humanitarian staff, convoys, facilities and supplies, and this includes delays and checkpoints for convoys. “You have an urgent situation on the ground in South Sudan, and we need the freedom to do the job that we must do, and can do, if we’re allowed to do it,” he stated.

Another major challenge is funding, particularly as the onset of the rainy season draws near. “We are in a race against time with the rainy season fast approaching that we have to pre-position stocks. We really do appeal to our donor community to give us the funding that we need to do the things that we most urgently need to do, in the quickest way possible.”

Yasmin Haque, Deputy Director, Office of Emergency Programmes at the UN Children’s Fund (UNICEF), who was also on the inter-agency mission, said it was “tragic” to see what has happened in South Sudan, where she served as Country Representative prior to taking up her current post.

She noted that the conflict has “severely disrupted the hope” that the children of South Sudan had in their country, and it is really urgent to have funding and services in place to meet their needs. The conflict has also meant that children are facing grave violations, whether their schools are being occupied, health centres are being destroyed or children themselves are being recruited by the armed groups.

“We need to keep the attention on the plight of the people there and to make sure that we’re supporting them to the extent possible,” said Ms. Haque.

Amid the worsening crisis in South Sudan, the UN High Commissioner for Refugees (UNHCR) and the World Food Programme (WFP) this week appealed for $371 million in urgently needed support for the thousands of South Sudanese refugees arriving in neighbouring countries.

Since fighting erupted in mid-December, 204,000 people have fled to Sudan, Uganda, Ethiopia and Kenya, according to UNHCR. With continuing insecurity and growing food shortages inside South Sudan, the agency expects the number of South Sudanese refugees across the region to reach 340,000 by the end of the year.

UNHCR spokesman Adrian Edwards told reporters in Geneva that South Sudanese have recently been fleeing into neighbouring countries at a rate of nearly 2,000 per day, with most heading to Ethiopia and Uganda. Many of the refugees have been arriving exhausted, nutritionally weak and in poor health, having coming from areas of South Sudan experiencing severe food shortages.

The majority are women, children and older people. With some 700,000 people displaced inside South Sudan and 3.7 million at high risk of food insecurity, the potential for further cross-border movement is high.

“Given these trends, the regional emergency response announced yesterday will focus on protection activities and other life-saving needs. These include emergency food, water, sanitation and health,” said Mr. Edwards, adding that UNHCR “will be developing and expanding refugee camps and other sites where basic services will be available.” 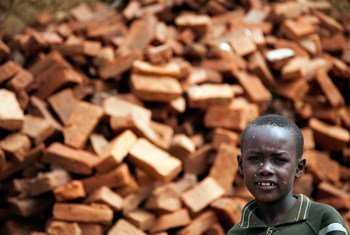 24 March 2014
The African Union-United Nations peacekeeping mission in Sudan’s Darfur region is providing protection to thousands of people who sought refuge at its bases in Korma and Khor Abeche following violent attacks by armed assailants in the past several days.