The United Nations family today urged immediate action to secure the release of detained staff, to resolve the cases of those missing and to protect all the courageous individuals who carry out the life-saving work entrusted to the Organization and its partners.

“The world is a far more dangerous place for United Nations and humanitarian personnel today than it was even a few short years ago,” Secretary-General Ban Ki-moon said in his message for the International Day of Solidarity with Detained and Missing Staff Members, observed on 25 March.

He noted that as of 21 March, 56 UN personnel remained in detention and 4 UN and associated personnel abducted by non-State actors remain in captivity.

“I urge all concerned to do everything possible to secure their immediate release,” said the Secretary-General, who also strongly urged those Member States holding UN personnel to provide immediate access and fully respect their rights and privileges.

“I am deeply concerned at the unlawful detention and arrest of United Nations and humanitarian personnel, as well as at the lack of access to those staff. I call for immediate action to secure their freedom and rights.”

One example of this was highlighted recently by Under-Secretary-General for Peacekeeping Operations Hervé Ladsous, who reported to the Security Council that authorities in South Sudan continue to harass UN staff, to the point of putting their lives in danger. UN staff members have been subjected to threats, harassment, physical assault, arrest, detention and unlawful interrogation.

Mr. Ban added that he was especially worried about the brave individuals working in Syria; the increase in abductions for ransom; and the impunity that prevails. Noting that the vast majority of cases regarding arrested, detained and missing staff members do not result in prosecution, he called for an end to the culture of impunity and for the full prosecution of all those responsible.

General Assembly President John Ashe encouraged the global community to work more effectively to protect UN staff members who continue to face threats to their freedom and security, noting that the number of attacks on UN staff members has steadily increased in recent years and at an alarming rate.

“This day underscores the need for the international community to do everything it can to protect UN personnel working in places where performing day-to-day tasks may put their lives at risk,” he stated in his message.

“It also pays tribute to all UN staff members who have been killed or kidnapped while working in conflict zones and calls on governments to implement much needed security and safety standards,” he added.

The International Day marks the anniversary of the abduction of Alec Collett, a former journalist and UN staff member who was working for the UN Relief and Works Agency in the Near East (UNRWA) when he was abducted by armed gunmen in 1985. With his remains having been found and returned to his family in 2009, the Day is also intended to honour his memory, and of all those who have suffered similar fates.

“In our mission to increase peace and security around the world, the United Nations asks us to work in the world’s most dangerous places,” said Ian Richards, Vice-President of the UN Staff Management Committee. “We do this out of a sense of duty and on the understanding that we will be looked after.

“However, it is now clear that the United Nations flag has increasingly become a target instead of a shield, especially for colleagues recruited at the national level. We call on the Secretary-General and all Governments to do more to protect staff and their independence, so they can focus on their work, not work in fear.”

♦ Receive daily updates directly in your inbox - Subscribe here to a topic.
♦ Download the UN News app for your iOS or Android devices.
staff|Security 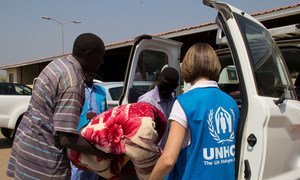 The United Nations Mission in South Sudan (UNMISS) reports increasing difficulties in implementing its mandate due to growing restrictions of movement, and calls on all parties to respect the work done by UN staff and the inviolability of the Organization’s assets and premises.