UNHCR/M. Sibiloni
Ugandan fishermen in their pirogues search for victims of a boat which capsized on Lake Albert. The boat was carrying Congolese refugees who had decided to return home.
24 March 2014

The United Nations refugee agency said today it was shocked and saddened by the deaths of scores of refugees from the Democratic Republic of the Congo (DRC), including children, who drowned when the boat carrying them back home from western Uganda capsized.

The boat was one of two that left on Saturday morning from Uganda’s Hoima district on the eastern side of Lake Albert, which lies on the border between the two countries, the UN High Commissioner for Refugees (UNHCR) said in a news release.

Based on information UNHCR has received so far from the authorities and refugees, 41 people were rescued and 98 bodies recovered after the boat capsized. As many as 250 people may have been aboard the boat.

“This tragedy has shocked me profoundly,” said High Commissioner for Refugees António Guterres. “My thoughts are with those who have lost dear ones, and the survivors. I am grateful to the Government and other actors who have mounted a rescue-and-recovery operation and are assisting the survivors. I have called on UNHCR’s Uganda office to fully support these efforts.”

The survivors have been transported to north-west Uganda’s Bundibugyo district, where UNHCR, its partners and Ugandan Government officials are providing support, including psycho-social help.

UNHCR and the Ugandan Government are also facilitating the transportation of bodies back to the DRC. Additionally, UNHCR has mobilized support staff and resources, and set up an information and response point in Bundibugyo to support relatives of the survivors.

Uganda is still host to almost 175,500 refugees from DRC, including some of the 66,000 who have fled to Bundibugyo since last July to escape fighting in the country’s volatile east. The ones affected by this tragedy were from this group, UNHCR noted.

Over the past three months, the agency has seen a rise in the number of refugees returning spontaneously to DRC. The majority of them are heading for the relatively safe and secure area of Rutshuru in DRC’s North Kivu province, while some returnees to the Kamango area further north are reportedly staying in camps for internally displaced people.

Refugees are using both the boat route via Lake Albert and roads, UNHCR noted, adding that a campaign warning about the dangers of crossing the lake was under way when this weekend’s tragedy occurred. 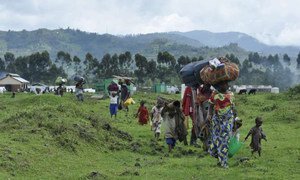 Some 10,000 people in the Democratic Republic of the Congo (DRC) have been forced to flee to Uganda after the latest wave of fighting between Congolese Government forces and the rebel group M23, the United Nations refugee agency said today.