IRIN/Sean Kimmons
Tuberculosis-infected patients from Myanmar live in these huts for the duration of their treatment at the Wangpha TB clinic across the border in Thailand.

24 March 2014
On World Tuberculosis Day, the United Nations is calling for intensified global solidarity to eradicate the preventable disease, particularly by mobilizing the resources to bridge the “substantial” funding gap for TB care and control.

“By caring for the 3 million people who do not have the treatment they need, we will foster a better future for all humankind,” said UN Secretary-General Ban Ki-moon in his message on the Day, in which he declared: “Everyone with TB should have access to the services they need for rapid diagnosis, treatment and cure. This is a matter of social justice.”

He said that it is also an issue of global health security, given the rapidly emerging problem of patients with deadly, extensively drug-resistant TB going undetected. Even when they are diagnosed, many lack access to effective treatment.

“To accelerate results, we need to increase access to health services and mobilize communities, hospitals and private providers to reach more people and treat them faster. We must also invest more in research to find diagnostic tools, drugs and vaccines,” said the UN chief.

Ahead of the Day, UN World Health Organization (WHO) Director-General Margaret Chan held a press briefing in Geneva on the state of global efforts to address TB, the world’s second most deadly infectious disease among adults, after HIV/AIDS. Every year, TB kills 1.3 million people and causes nearly 9 million to fall ill.

Dr. Chan said that on many levels, TB control is a “glowing success story.” Twenty years ago, in 1993, WHO declared the spread of tuberculosis a global public health emergency.

“Within a decade, a strategy had been adopted in nearly every country in the world. It worked. In fact, it had a dramatic impact,” she said, explaining that the epidemic peaked 10 years ago and began a slow but steady decline.

“The Millennium Development target of halting and reversing the TB epidemic by 2015 has already been achieved. Overall, the world is on track to meet the target of a 50 per cent reduction in deaths compared with 1990,” she continued, adding that between 1995 and 2011, 51 million people were successfully treated for TB using the WHO strategy, saving 20 million lives.

“[Yet] despite recent successes in shrinking the epidemic, the global TB burden remains enormous,” said Dr. Chan. Another key challenge has been the rise of TB strains that are resistant to multiple first-line drugs or extensively resistant to second-line drugs as well.

Indeed, with some 630,000 people currently ill, drug-resistant TB “has been detected in virtually every country that has looked for it.” She said such strains are notoriously difficult to diagnose and extremely costly to treat. On average, only about 50 per cent of drug-resistant TB cases are cured.

She urged learning from countries that have contained the threat and urgently supporting those where drug-resistant strains of TB are nearly the norm. “We are just treading water when we desperately need to scale up the MDR-TB response. What has been gained through impressive international collaboration can be so easily lost,” warned Dr. Chan.

Further, she said that the funding gap for TB care and control is substantial and “we are calling for the investment that this global epidemic deserves.” 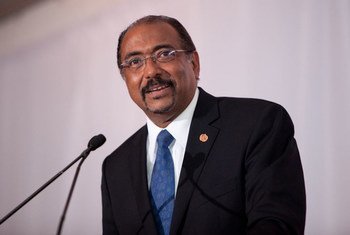 3 December 2013
The Joint United Nations Programme on HIV/AIDS (UNAIDS) welcomed today a $12 billion commitment by international partners to the Global Fund to Fight AIDS, Tuberculosis and Malaria at its fourth replenishment meeting in Washington, DC.