The head of the United Nations office focusing on the world's women has welcomed the outcome of a two-week meeting in New York that she says represents a “milestone” towards a transformative global development agenda that puts the empowerment of women and girls at its centre.

“We know that equality for women means progress for all,” Phumzile Mlambo-Ngcuka, Executive Director of the UN Entity for Gender Equality and the Empowerment of Women (UN Women), said in a statement on the outcome of the 58th session of the UN Commission on the Status of Women.

“Through the development of a comprehensive roadmap for the future, we have the opportunity to realize this premise and promise,” she added. “The 58th session of the Commission on the Status of Women has given important impetus to making equality between men and women a reality.”

During its annual session in New York, more than 6,000 representatives of Member States, UN and non-governmental organizations (NGOs) at the Commission discussed the challenges and achievements in the implementation of the eight anti-poverty targets known as the Millennium Development Goals (MDGs) ahead of the 2015 deadline.

They also discussed women and girls' access to education, training, science and technology, as well as women's equal access to full employment and decent work.

Member States have stressed that while the MDGs have advanced progress in many areas, they remain “unfinished business” as long as gender inequality persists, noted the Executive Director.

“The clear analysis of Members States on the shortcomings in the design and implementation of the MDGs provides us with valuable guidance as the international community devises a comprehensive post-2015 agenda,” she stated.

She also commended the Commission for identifying critical issues that were not sufficiently addressed by the MDGs, such as violence against women, and calling for measures to address these.

This year's meeting of the Commission comes ahead of the 20th anniversary of the landmark Fourth World Conference on Women, held in Beijing in 1995. The Beijing Declaration and the Platform for Action, adopted unanimously by 189 countries at the conference, is considered the key global policy document on gender equality, addressing critical areas such as women and poverty, violence against women and the human rights of women. 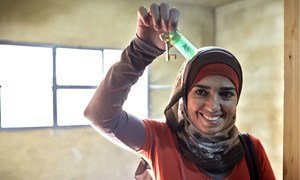 To mark International Women's Day, the United Nations family is spotlighting a simple truth: achieving equality for women and girls is essential not merely because it is a matter of fairness and fundamental human rights, but because progress in so many other areas depends on it.