Special Rapporteur on the situation of human rights in the occupied Palestinian territories Richard Falk.

21 March 2014
An independent United Nations human rights expert today called for an assessment by the International Court of Justice (ICJ) of the legal status of Israel’s prolonged occupation of Palestinian Territory.

“Special steps must be taken to ensure that the human rights of the Palestinian people are protected and the rule of law established in an occupation which has lasted now for more than 45 years,” said Richard Falk, UN Special Rapporteur on occupied Palestine, in a press release ahead of the presentation of his final report to the UN Human Rights Council on Monday.

Asking that the Court – the UN’s highest legal body – weigh allegations that the occupation has legally unacceptable characteristics of “colonialism, apartheid and ethnic cleansing,” the expert also called on the Council to examine the legal implications of the occupation, and urged the international community to act decisively to uphold Palestinian human rights.

“Ongoing settlement expansion remains a serious obstacle and undermines prospects for Palestinian self-determination,” he said, noting that the number of settlements built in the West Bank doubled in 2013, according to Israeli official data.

“So far, there have been no signs of change in this trend for 2014 and Israel has already defiantly approved the construction of hundreds of new homes in the first three months of the year despite the ongoing peace negotiations.”

Mr. Falk also reiterated concerns on the separation wall, recalling that, in 2004, the ICJ declared the barrier’s construction illegal in the occupied territory. An estimated 85 per cent of the planned route of the Wall lies within the West Bank; more than 60 per cent of a planned 708 kilometres has been completed and construction continues.

“Such a course of action undermines respect for international law and should be challenged,” Mr. Falk underscored.

The Special Rapporteur called for urgent attention to the deterioration of the situation in East Jerusalem, which his report describes as a “microcosm of the fragmentation of territory taking place throughout the West Bank.” He noted that “more than 11,000 Palestinians have lost their right to live in Jerusalem since 1996, under rules imposed by Israel.”

The potential liability of companies who profit from settlements is also analyzed in the report. “The international community is starting to react responsibly in relation to issues of corporate social responsibility,” Mr. Falk said.

“Some companies and countries are increasingly moving away from engagement with settlements on the basis of their illegality under international law; these examples are to be commended and should be followed by others.”

The human rights expert also expressed his views on a worsening humanitarian situation in occupied Gaza, noting that “the effects of the blockade, coupled with regional developments, are having a severe impact on the civilian population of Gaza.”

“We mustn’t forget that thousands of Palestinian political detainees, including children, remain in Israeli prisons. Among them are more than a hundred administrative detainees. Many of them are subjected to ill-treatment and torture from the time of their arrest to their interrogation in detention,” said Mr. Falk.

Speaking before his final appearance as Special Rapporteur before the Council, Mr. Falk stressed the importance of this mandate to bear witness to the serious human rights violations that continue to afflict the Palestinian people after more than four and half decades of occupation.

“In the face of Israel’s continuing refusal to cooperate with this mandate, accentuated by defamatory attacks by political non-governmental organizations intent on undermining it, it is of the utmost importance that my successor is supported and enabled by the United Nations and the Human Rights Council to report objectively on the human rights violations being endured by the Palestinian people,” he stressed. 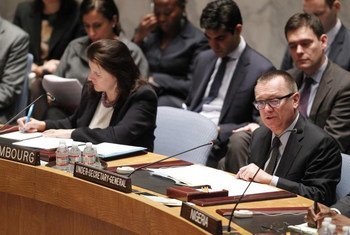 18 March 2014
Against the backdrop of last week’s ‘dangerous escalation’ in Gaza and Israel, the top United Nations political official told the Security Council today that this latest upsurge serves as yet another reminder that the international community must work together to resolve the Arab-Israeli conflict and restore prospects for a durable peace throughout the Middle East.